Later this year, Burberry CEO Angela Ahrendts will move to Apple as a new senior vice president in charge of Apple's retail and online sales efforts. Before Apple announced her hiring in October, Fast Company spoke extensively with Ahrendts across several non-Apple related interviews. However, since the announcement, she has unsurprisingly declined any interview requests.

In a wide-ranging profile, Fast Company looks at Ahrendts' job history and work style, the troubles Apple Retail has seen in the past few years, and how her experiences at Burberry could shape Apple Retail's growth going forward. 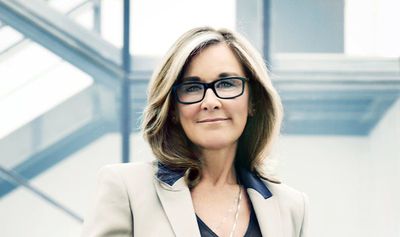 Ahrendts' is not a tech-savvy geek, but she has a vision for how to speak for customers. In an interview with Vishal Sikka, a development executive at SAP, Fast Co. discovered that she exhibits some Steve Jobs-esque tendencies:

She saw a wealth of information... what did customers respond to? What did they like or dislike? What did they share on social media? She thought there must be a way to collect and share such data with the whole Burberry team, as well as combine all six of Burberry's consumer-intel databases into one salesperson-friendly interface. "She wanted to merge the digital experience with the in-store experience," Sikka says. She did not know how to do that herself; she freely acknowledges that she is no digital native nor is she fluent in the language of coders and engineers, but she is very good at asking for help. "She is not a geek. She is not technical," Sikka says. "But she has a vision for things she wants to see, and she has a profound understanding of what technology can do for people."

Beyond that, Ahrendts put extensive amounts of technology into the sales experience at Burberry. She created a back-end system that allows every Burberry salesperson, across 330 stores, to access all the data that the company has collected on individual customers, including data as detailed as whether customers prefer to browse merchandise with assistance or to be left alone.

The company uses RFID tags extensively, allowing customers to bring a piece of merchandise to a mirror and a video will appear with a model wearing the coat. She also oversaw the creation of a website where users can upload photographs of themselves wearing Burberry attire, allowing users to share their looks and potential buyers to imagine themselves in Burberry garb.

Finally, Ahrendts appears to take a page out of Ron Johnson's communicative playbook. Johnson was famous for the videos he recorded to be played to all Apple Retail employees at quarterly staff meetings, and Ahrendts currently does weekly videos for Burberry's 11,000 employees.

At Burberry, she communicates constantly with her 11,000 employees, sending emails to thank them for a particular contribution and frequently jetting to offices and stores around the world (she tries always to be home by Friday night to be with her husband and her kids, who are 18, 17, and 13). She is adamant that significant news be shared first with staff, so that they never learn about their own company by reading the papers. She does a weekly video update--soon, perhaps, Apple staff will joke about how perfect Ahrendts's hair is, just as they did with Johnson. Her main message is usually "thank you." Sometimes that's an epilogue to an all-hands call to action: "I will sit there on the webcast and say, 'Okay, guys, we're nearing the end of the quarter and it's really tight, but I know we're gonna make it because there's 11,000 of you out there,' " she says. "'Could you do me a favor? Just one extra call to a customer? 'Cause if you do that, we'll win.'"

Angela Ahrendts will join Apple this spring and will continue in her role as Burberry CEO until then. In his email to Apple employees announcing the hire, Tim Cook said Ahrendts' shares Apple's values and "focus on innovation" and that she "embraces our view that our most important resource and our soul is our people".

Apple Retail has been without a leader since John Browett was fired in October of 2012.

milo
She cares what consumers want and listens to what they have to say? That actually sounds like the exact opposite of how Steve Jobs was.
Score: 18 Votes (Like | Disagree)

dejo
Mod Note: This thread was closed temporarily to remove all the off-topic discussion of looks and gender. Now that it's reopened please remain on-topic. Otherwise, this thread may be closed again, perhaps permanently.
Score: 6 Votes (Like | Disagree)

Aussi3
I think she will fit in great :) excellent addition to apple
Score: 6 Votes (Like | Disagree)

Why don't you stop insulting dead people? How disgusting.

I'm not sure that was an insult so much as an observation. It doesn't seem to be a secret that Apple has never really been in the business to give consumers what they seem to cry for as much as what they seem to think we want. I've said it a number of times, I've read it a number of times, and I will continue to think that way. For example, many people discussed wanting a larger iPhone. When it came it was only larger by way of height and not width. People buy the phones, they continue to buy it, and Apple counts their pennies yet still, people tend to long for some massive screen iPhone to be released. This is not to say everyone wants it, just that you do see people on the internet favoring this idea.

Again, observations aren't really insults unless you are somehow overly sensitive to what is said about the late Steve Jobs. If the poster said Steve Jobs was a tool or something, then that's really an insult. A silly one, but an insult nonetheless.

She sounds like someone who can be good for the company given her past experience.
Score: 5 Votes (Like | Disagree)

smithrh
Back to the store topic:

Hopefully someone, somewhere will fix the store experience when you know what you want, and you want to buy it right then and there.

I went to what I wanted to buy. I then turned around (e.g., not facing the wall) and tried to make eye contact with one of the hordes of Apple folk around. I waited 8 minutes (I timed it) before I raised my hand, and even after doing that it took 2 minutes for someone to notice.

The number of times I've actually needed help at the store are few. Yes, people who read MacRumors are in the distinct minority, but it wouldn't take much at all to fix this. No, I don't want an app. Give some poor schmuck a bright yellow tshirt and spread the word that that's the person to go to for quick purchases...

They have to do something. Apple stores are the most cold and boring places I have ever been to. All those ikea style tables make it look like a warehouse at best.
If my first contact with Apple was trough a retail store I had never become a customer.


maybe to you...... everything is cold and boring if youve been there 50,000 times...but i still think the apple store is still the best store out there...
what electronics store is better???
Score: 4 Votes (Like | Disagree)
Read All Comments

Tuesday October 4, 2022 3:30 am PDT by Hartley Charlton
The European Parliament today voted overwhelmingly in favor of enforcing USB-C as a common charging port across a wide range of consumer electronic devices, including the iPhone and AirPods, by the end of 2024. The proposal, known as a directive, forces all consumer electronics manufacturers who sell their products in Europe to ensure that a wide range of devices feature a USB-C port. This...
Read Full Article • 310 comments