Apple is honoring Earth Day in a new ad found on newspapers across the UK that appears to also include a jab at rival Samsung, reports CNET.

The ad, which comes with a headline stating "There are some ideas we want everyone to copy," includes two paragraphs that allude to the company's ongoing patent trial with Samsung. Apple notes that there is "one area" where the company "encourages others" to imitate, calling for initiatives that are similar to its recent environmental efforts. 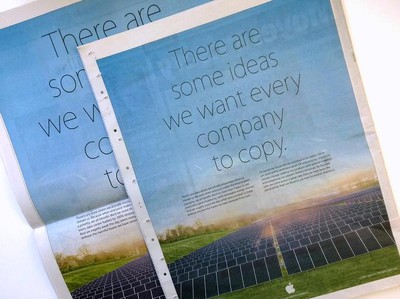 There's one area where we actually encourage others to imitate us. Because when everyone makes the environment a priority, we all benefit. We'd be more than happy to see every data centre fuelled by 100% renewable energy sources. And we eagerly await the day when every product is made without the harmful toxins we have removed from ours.

Of course we know we can continue to do better. We've set some pretty ambitious goals for reducing our impact on climate change, making our products with greener materials and conserving our planet's limited resources. So the next time we come across a great idea that can help leave the world better than we found it, we look forward to sharing it.

Apple and Samsung are currently in their second legal battle over accusations of patent infringement, with the former requesting $2 billion in damages from the latter. In its defense, Samsung stated that it only owes Apple $40 million, as the trial is expected to conclude and head into jury deliberations sometime this week.

The ad is one part of Apple's "Better" environmental campaign launched yesterday ahead of today's Earth Day event, which included a video about the ecological efforts of its Apple Campus 2 project and the expansion of its recycling program to include all products at its stores. Apple will be updating its store logos with green leaf accents and encouraging its employees to wear commemorative green shirts, as an event at its headquarters in Cupertino, California is also planned.

Update: The newspaper ad is also appearing in Australia, and presumably other countries as well.

Icaras
When Apple finally does decide to take a jab at the competition, it's just done with so much more class than Samsung.

keterboy
Looks like Phil Schiller's harsh words to the Ad Agencies paid off after all.
Score: 17 Votes (Like | Disagree)
Read All Comments