Late last month, a set of alleged design drawings was published by Japanese magazine MacFan, showing dimensions for upcoming 4.7-inch and 5.7-inch iPhone models. It's not uncommon for us to see design and case leaks in the months leading up to the new iPhone release.

In some cases, as with the iPhone 5C, early design leaks turn out to be quite close to the final product, though in other instances they turn out to be inaccurate. 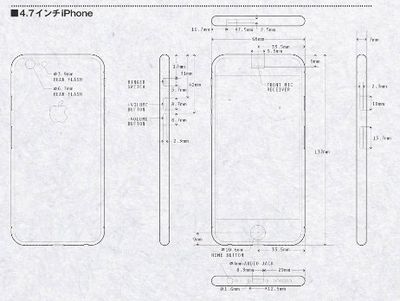 Based on those drawings, MacRumors commissioned designer Ferry Passchier to create some full product renderings of the rumored iPhone 6. While these aren't the first renderings, we asked Ferry to also show how they would compare in size to existing devices such as the iPhone 5s and iPad mini.

The iPhone designs in the drawings include several differences compared to the iPhone 5s. The top power button has been moved from the right side to the left side of the device. The rear camera on the larger model is also shown as protruding slightly from the rear shell, as is the case with the current iPod touch. The camera flash has also reverted back to a round-design unlike the one found on the iPhone 5s.

Over the weekend, an Apple slide deck from April 2013 surfaced from the ongoing Apple-Samsung patent trial, illustrating Apple's awareness that smartphone growth was coming from the low end of the market and in phones with screens larger than the iPhone's 4-inch display. With the slides noting that "customers want what we don't have", it's clear why Apple is reportedly planning to increase the size of the iPhone's display with this year's models. The iPhone 6 is expected to debut this fall, although a recent report from Reuters claims that the larger version may not be ready to launch at that time.

We can't be certain these schematics are accurate, but Apple clearly sees the need to address the larger smartphone market. We expect more leaks in the future as production of the iPhone 6 begins ramping up.

dacreativeguy
Some of us aren't:

Apple please make a phone I can fit in my normal sized 'white guy with no rhythm' pockets!
Score: 37 Votes (Like | Disagree)

pgiguere1
A couple things that may mean the drawings are fake:

* The dimension for the Lightning connector is narrower than currently. It's unlikely that the cable would actually fit in a hole that's more than 1mm narrower.
* The camera is incorrectly labeled as being a "rear flash". Unless there is a ring flash (which I doubt because of glare issues), I doubt Apple would make such mistake.
* Same goes for the earpiece which is incorrectly labeled as a mic.
* I really doubt Apple would add buttons on the side AND change the lock button shape AND change the camera position.


The drawings were also supposed to represent an iPhone 6c, not iPhone 6. An all-metal iPhone 6 would need either RF windows (like the iPhone 5/5s) or thin plastic bands to separate the external antennas (like the gaps on the sides of the iPhone 4/5 or the back of an HTC One). Even the iPod touch or Wi-Fi iPad have a RF window, so it's unlikely that an iPhone (with LTE and phone capabilities) would work inside a Faraday cage.
Score: 21 Votes (Like | Disagree)

decimortis
I just licked my screen.

mattbaar26
Wow I don't these look good at all.

I think the 5s and the HTC M8 are the two best looking phones out there right now but this rendering is as good looking as a Galaxy S4... Looks like what a 6c would be
Score: 18 Votes (Like | Disagree)

dlewis23
The best looking one so far I think. Still don't like the idea of the camera sticking out.
Score: 15 Votes (Like | Disagree)

Some of us aren't:

Apple please make a phone I can fit in my normal sized 'white guy with no rhythm' pockets!


Unless you're the "white guy with no rythm" with "Skinny white girl butt jeans" you shouldn't have a problem. I'm guessing you get your clothes in the woman's section? Maybe wears daisy dukes? Possibly "tiny girl hands?"
Score: 14 Votes (Like | Disagree)
Read All Comments