Monday April 7, 2014 3:23 pm PDT by Jordan Golson
iOS 7 adoption continues to grow, with Apple seeing the operating system on 87 percent of devices connected to the App Store, according to Apple's App Store developer support page. The numbers come seven months after the operating system's original release and two months ahead of the expected preview of iOS 8 at Apple's Worldwide Developers Conference in two month's time.

Apple has traditionally seen speedy adoption of its new iOS releases because it makes it easy for customers to upgrade to the new operating system without too much trouble, and it's likely that iOS 8 will see similar adoption after its expected release this fall.

iOS 8 is expected to include upgrades to Apple's Maps app, including possible support for public transit directions and enhanced points of interest, a Healthbook app that assists users in aggregating personal health data like blood pressure, heart rate, and more -- perhaps in concert with a smart watch product -- as well as improvements to Siri and iTunes Radio, two of the more recent additions to Apple's mobile operating system. 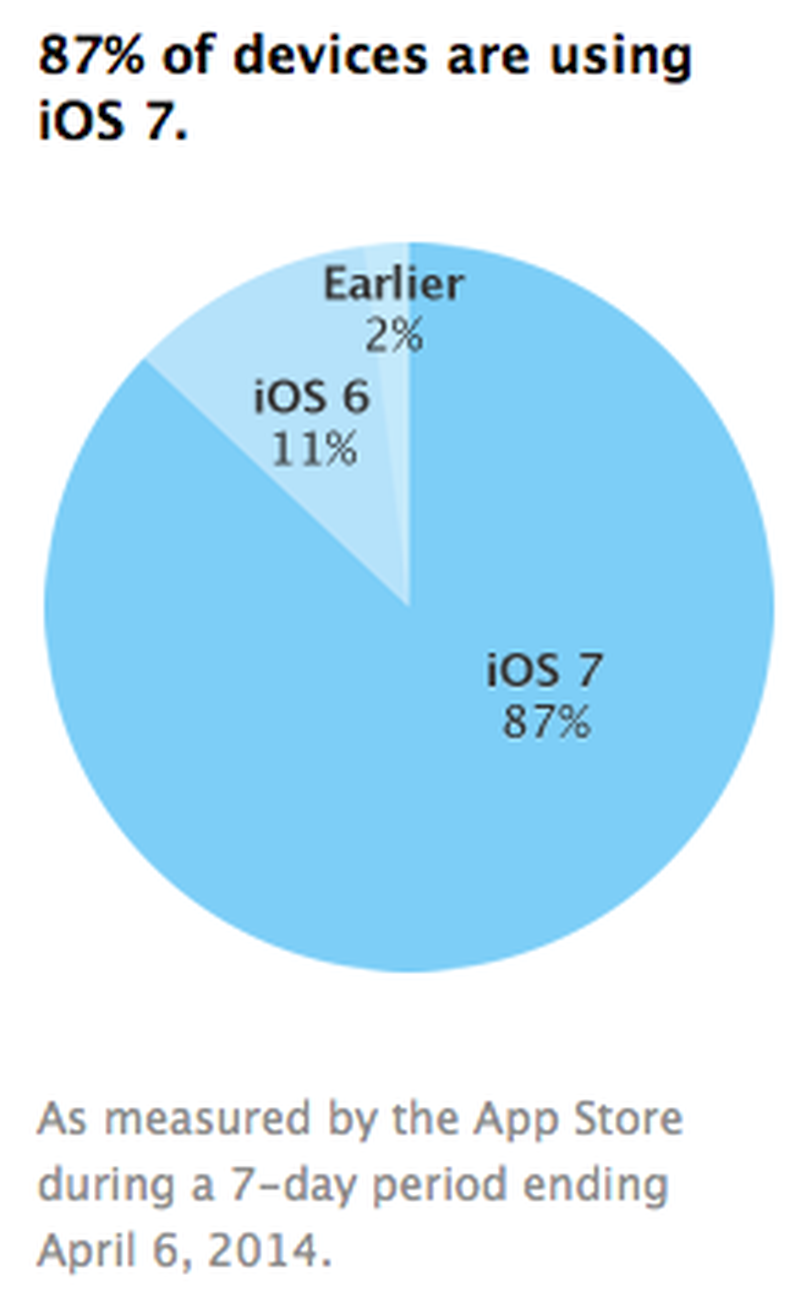 In contrast to Apple, Google sees only 5.3% of its users running the latest version of its Android operating system, version 4.4 or KitKat, which came out in October 2013 -- a month after iOS 7 was released.

The increasing adoption rate of iOS 7 has also led to a drop in iOS 6 usage, with the older operating system now installed on just 11 percent of devices. 2 percent of devices are using older versions of iOS. In early December, iOS 7 usage was at 74 percent, jumping to 78 percent later in December, 80 percent in late January and 85 percent towards the end of March.


By that logic, since Windows 8 is selling better than Windows 7 did, does that mean more people like Windows 8 too?

iLoveiTunes
So much for being a fail... eat that haters.
Rating: 27 Votes

So adoption numbers for iOS somehow imply or even really relate to how good it is?


At an 87% adoption rate with only a vocal minority complaining on forums, it's safe to say that it's pretty good.
Rating: 15 Votes

So adoption numbers for iOS somehow imply or even really relate to how good it is?
Rating: 15 Votes

At an 87% adoption rate with only a vocal minority complaining on forums, it's safe to say that it's pretty good.

By that logic, since Windows 8 is selling better than Windows 7 did, does that mean more people like Windows 8 too?


I wonder what the numbers would be like if apple hadn't blocked you from downgrading to iOS 6. I know at least 4 people who asked me how to do it (you pretty much cannot).

That being said, iOS 7.1 is a big advancement. Hopefully iOS 8 will be even better.

EDIT: 5 seconds after tapping "Submit", Safari crashed. Add that to the 6-7 hard reboots a day and you see where I am.
Rating: 11 Votes

Uhh yes. They do relate to how good it is. People wouldn't upgrade if it sucked.

Well, not really, that's the point. I think it can easily be argued that most upgrade just to upgrade and because an upgrade just shows up on their phone and those with new devices automatically get it without any choice in the matter. So, again, no, not really.
Rating: 8 Votes