On occasion, Apple has implemented new hardware components for its iOS devices without a public announcement and these minor changes often go unseen by consumers as they tend to introduce very minor improvements in efficiency. For example, an Apple TV update in January of 2013 revealed a new Apple TV, which turned out to be a minor update with a smaller A5 chip. That change was not obvious to Apple TV purchasers, but it did warrant a model number jump to 3,2 from 3,1. 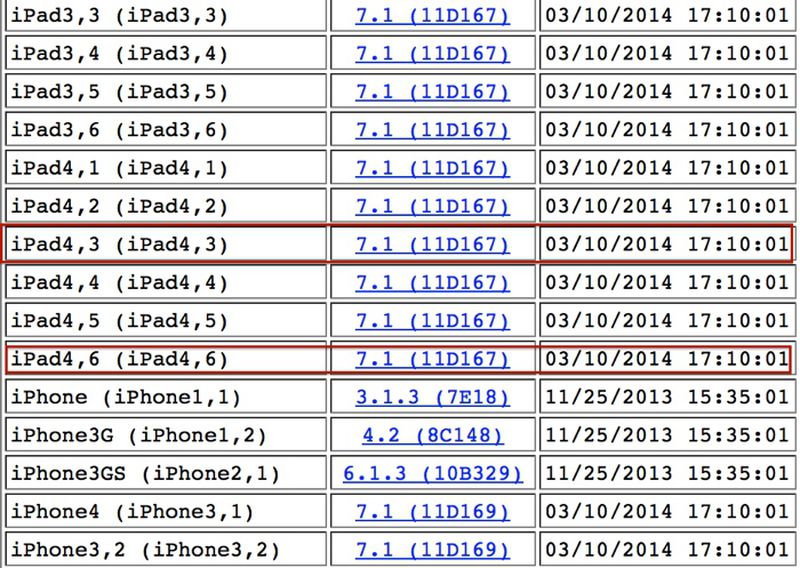 As noted by 9to5Mac, it is also possible that iPad4,3 and iPad4,6 represent iOS devices that are optimized for networks in other countries.

goodcow
Maybe they're the models with 2GB of RAM, since 1GB is a joke.
Rating: 11 Votes

Maybe they're the models with 2GB of RAM, since 1GB is a joke.


Ultimately, 2GB is would be fantastic but the comparison is not a direct apples to apples. It's Apples to Androids... :D

Google (LOL) ART is replacing Android's Dalvik to improve this disparity. It's the reason a dual core A7 1.3 GHZ with 1GB of RAM runs circles around a quad core Snapdragon 800 at 2.2 GHZ...

What can't you do on an iPad that you think requires more RAM?

Not that I condone using tumblr or anything.
Rating: 4 Votes

Maybe they're the models with 2GB of RAM, since 1GB is a joke.


What can't you do on an iPad that you think requires more RAM?
Rating: 3 Votes

Not that I condone using tumblr or anything.


omg loading gifs on an iPad is the worst. i cant even count how many times tumblr or safari crashes loading them
Rating: 2 Votes

Charliebird
They're going to revise the iPad Air and rMini with 3gb ram, full color gambut screens, 32 GB min storage space, shaved off another 1/3 pound weight, 15 hour battery life, and Touch ID. It's going to be the bees knees and you really should have held out for it.
Rating: 2 Votes

NEW IPADS ARE COMING!!!! THEY STILL PUSH OUT NEW IPADS EVERY YEAR!!!W OOW....

If Apple releases a new iPad Air and iPad mini with the only differentiators being 2gb of ram and touch ID I may have to hit someone...


Does anybody here really think that Apple is going to forge a new A7 chip packing a magical 2 GB of RAM for six months? And then the new iPads come out with iOS 8 and an A8 with 2 GB RAM in October?

So would the other current A7 devices get the same mid-cycle upgrade? I just don't think doubling the RAM of a computing device could be considered a "silent update". It doesn't make any sense to do so from a business standpoint, and it's not even an advertised spec. :)
Rating: 1 Votes

Jacquesass
TouchID for the iPads now that the sapphire shortage has been fixed.

True new iPads come out later with A8.
Rating: 1 Votes
[ Read All Comments ]