Apple's first retail store in Brazil opened in Rio de Janeiro this weekend, with approximately 1,700 customers waiting in line for the grand opening (via The Globe]. Customers started queueing up on Thursday night for the Saturday morning debut, with groups waiting both inside and outside the Village Mall. 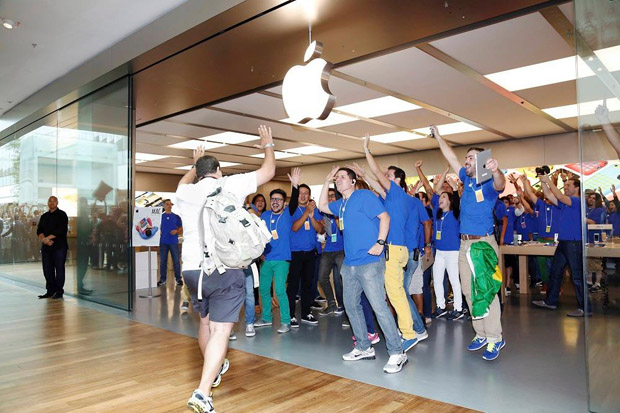 Photo from The Globe

The opening of the Rio de Janeiro store was announced last week on the company's website and is Apple's first store in Latin America. The store has a fairly unique single floor, pavilion-style design with a curved glass exterior. Unlike most other Apple retail stores, the Rio de Janeiro location features a split-concept layout where one half of the store is dedicated to product demonstrations while the other half is focused on accessory sales and services.


Speaking to Brazilian news site The Globe, Apple CFO Peter Oppenheimer confirmed that Brazil was an increasingly important market for Apple. The Rio de Janeiro store is part of a larger plan to tap into the Latin American market, which traditionally has been a weak market for Apple due to the high import taxes levied on electronic devices.

Apple will be selling its full product lineup in the Rio store, including the iPhone 5S starting at the equivalent of $1,174, with high taxes making it the most expensive Apple retail store for iPhone purchases (via Bloomberg).

Taz Mangus
Waiting to see the article from the NYT putting a negative spin on this. Maybe this time they will claim only 1 person showed up.
Rating: 2 Votes

LiveinRiot
I was actually there and the prices are ridiculous, part of it is taxes and another part is the fault of Apple itself. It is sad to have to pay so expensive apple products.
Rating: 1 Votes

1700 people wait in line for an Apple retail store to open.


What other company generates this kind of excitement for the opening of a retail store in the age of online shopping?

I can't think of one. Yet, Apple's stock price does not reflect nearly that level of goodwill value from the brand. Consumers love Apple, but with the current P/E ratio it is apparent that Wall Street does not feel the same way. Something has to give with the price of AAPL -- it has to eventually correct to north of $850 per share.

The stock is priced like Apple's is Justin Bieber and its customers are like Bieber's fans. It is as if Wall Street thinks 100% of these customers with over 90% customer satisfaction ratings are just going to outgrow Apple and find a new favorite teen idol despite the incredible customer satisfaction ratings with Apple products and the willingness of people to spend top dollar to own the best.

If Apple had Google's P/E ratio then AAPL would be priced at over $1300 per share. And that is not even looking at the "Ex-Cash" P/E ratio which would send it north of $1600 per share.


Markets aren't rational which is why the 'pure free market' simply doesn't work - why there are controls such as halting the the trade when there is a rapid drop of a stock etc. End of the day Apple is a maturing company and the people wanting a quick buck off the back of unsustainable high growth rates are going to move on just as what happened with Microsoft (Steve Balmer doubled the revenue of Microsoft yet apparently he has been a failure - ok).

Regarding the price of Apple products - Brazil is apparently addressing the issue of tariffs but you'll find in many cases the tariffs are the only effective way for a developing country to raise government revenue given that the institutions required for regular and consistent taxation just aren't there yet (I'd hazard to guess that less than 30% of the population pays income tax) hence their reliance on being able to collect tax at the boarders on imported goods or taxing businesses instead. Long term Brazil will eventually have to get its act sorted out and address the structural institutional problems or otherwise it'll end up losing the faith of investors who need a stable and secure basis on which they'll invest their money.
Rating: 1 Votes

guzhogi
Congrats to Brazil. The prices seem high compared to the US, though. Glad to see there was a big turn out to the opening.

I was at Oak Brook mall in Illinois this weekend and the Apple Store there moved to a much bigger place. I'd say easily 3x the size of the original store, and it was still crowded.

Anyone else wonder if Microsoft will soon open its own store near the store in Rio? The one in Oak Brook is pretty cool, but empty. Plus, the people working at the M$ version of the Genius Bar were kinda of jerks, but that's a different story entirely.
Rating: 1 Votes

Important question when considering the cost of an iPhone: how much do their plans cost? Is it still the most expensive place to own an iPhone when you factor that in?

The price of $1174 given in the article is without a contract.

WaxedJacket
I think by law if more than 10 Brazilians are congregating, it's required a Brazilian flag must be present.
Rating: 1 Votes
[ Read All Comments ]