Federal Bill Would Mandate Anti-Theft 'Kill Switch' in All Smartphones

Following last week's introduction of a California State bill that would require all cellular phones sold in the state to include antitheft technology, four senators have today introduced (via Re/code) The Smartphone Theft Prevention Act, a similar federal bill that would mandate the inclusion of such a "kill switch" in all smartphones sold across the country.

The bill would require smartphones to be equipped with both a kill switch to make a lost or stolen device inoperable and a system allowing consumers to remotely wipe their personal data.

"This legislation will help put consumers in control of their cell phone data through a 'kill switch' to immediately disable a stolen phone. Victims of cell phone theft should be able to fight back so they aren't victimized again through data and identity theft. And thieves should know that whenever they steal a cell phone, they won't be able to use it or sell it."

As with the California bill, it is likely that Apple's Activation Lock, introduced alongside iOS 7, satisfies the listed requirements. Activation Lock effectively disables a stolen smartphone by preventing it from being wiped and reactivated without an Apple ID and password. Apple's Find My iPhone also allows for devices to be remotely wiped and locked. 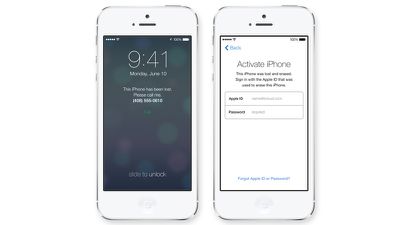 Cellular industry group CTIA has already spoken out against the newly introduced legislation, calling on lawmakers to criminalize tampering with mobile device identifiers rather than requiring cell phone manufacturers to build kill switches into their devices.

"Rather than impose technology mandates, a better approach would be to enact Senator Schumer's legislation to criminalize tampering with mobile device identifiers. This would build on the industry's efforts to create the stolen device databases, give law enforcement another tool to combat criminal behavior, and leave carriers, manufacturers, and software developers free to create new, innovative loss and theft prevention tools for consumers who want them."

Note: Due to the political nature of the discussion regarding this topic, the discussion thread has been moved to our Politics, Religion, Social Issues forum. All forum members and site visitors are welcome to read and follow the thread, but posting is limited to forum members with at least 100 posts.

Stay outta my life US Government!
Score: 45 Votes (Like | Disagree)

Stay outta my life US Government!


You should consider saying that over a "private" phone call with a buddy. You know, to make sure that they really hear you. :p
Score: 29 Votes (Like | Disagree)

There has to be a better way than making the devices rendered useless. It already concerns me that Find My iPhone could do that. For example if somebody died and their family member acquired their iDevice, it would be a pain for them to restore it, if there is even a way.


If somebody died, family members have something more important than an iDevice to think about .....
Score: 18 Votes (Like | Disagree)

Nunyabinez
My friend had her iPhone stolen yesterday, and she immediately put it into lost mode.

It will keep them from re-selling it, but I doubt they are going to find her and return her phone.

Most criminals are too stupid to realize that they won't be able to sell the phone before they steal it.

And people who steal phones to feed a drug habit typically don't care how much they get for something, so if it turns out it's only worth $20, that's $20 towards their next fix.
Score: 17 Votes (Like | Disagree)

Stay outta my life US Government!

But not as bad as Earwax (http://www.foxnews.com/health/2014/02/13/earwax-may-reveal-clues-about-persons-identity-and-habits-study-shows/?intcmp=features) research!
Score: 17 Votes (Like | Disagree)

Flood123
This "kill switch" will not stop theft. People will still nick phones and sell them for parts. Pointless legislation. A waste of time and money to push this through.
Score: 17 Votes (Like | Disagree)
Read All Comments