Apple is exploring a variety of different charging methods for its upcoming "iWatch" smart watch project, according to a report from The New York Times. At the top of the list for Apple appears to be induction charging, allowing users to recharge their watches wirelessly.

For its wristwatch, Apple has been testing a method to charge the battery wirelessly with magnetic induction, according to a person briefed on the product. A similar technology is already used in some Nokia smartphones — when a phone is placed on a charging plate, an electrical current creates a magnetic field, which creates voltage that powers the phone. 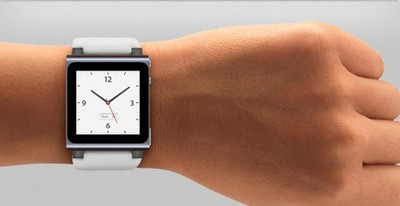 Apple's sixth-generation iPod nano with one of several included watch faces
Other options for Apple include solar and movement-based charging, although it appears those ideas may still be several years from becoming practical. The report also reiterates the newspaper's claim from last year that the iWatch will feature a curved glass display.

Apple has also experimented with new power-charging methods for a potential smartwatch, people close to the efforts said, though such experiments are years from becoming a reality. The watch is expected to have a curved glass screen, and one idea is to add a solar-charging layer to that screen, which would give power to the device in daylight, they said.

Another experiment at Apple has involved charging the battery through movement, a method that is already used in many modern watches. A person’s arm swinging could operate a tiny charging station that generates and pushes power to the device while walking, according to a patent filed by Apple in 2009.

The report notes that with battery technology improving relatively slowly, Apple has focused on improving power efficiency of various components in its devices, as seen with the latest generation of the MacBook Air.

iPod creator and Nest co-founder Tony Fadell is also quoted as confirming that Apple had explored solar charging for the iPhone and iPod for a number of years, but the technology proved infeasible due to users storing the devices in pockets and other dark places for extended periods of time.

For the iWatch, Apple has been working on flexible new battery designs and looking at new charging technologies, but battery life has reportedly continued to be one of the sticking points for Apple as it seeks to create a powerful smart watch capable of lasting several days between charges.

taptic
As long as it leaves the Galaxy Gear in the dust... but then, Apple could make something like that by accident.
Score: 16 Votes (Like | Disagree)

As long as it leaves the Galaxy Gear in the dust..

What I want the iWatch to be:


Be careful what you wish for:

ElTorro
Make it motion charged and design it for the right hand. Given the fan base, I predict it will never have to be connected to power.
Score: 6 Votes (Like | Disagree)


I imagine the issue is with how much energy is generated. A smart watch obviously needs a lot more power than a conventional one.
Score: 6 Votes (Like | Disagree)
Read All Comments