Monday January 20, 2014 10:04 am PST by Jordan Golson
Apple today released the fourth beta of iOS 7.1 to registered developers for testing purposes, following the release of the third iOS 7.1 beta at the beginning of this month. The update has a build number of 11D5134c and is available via an over-the-air update or through Apple’s developer center website. 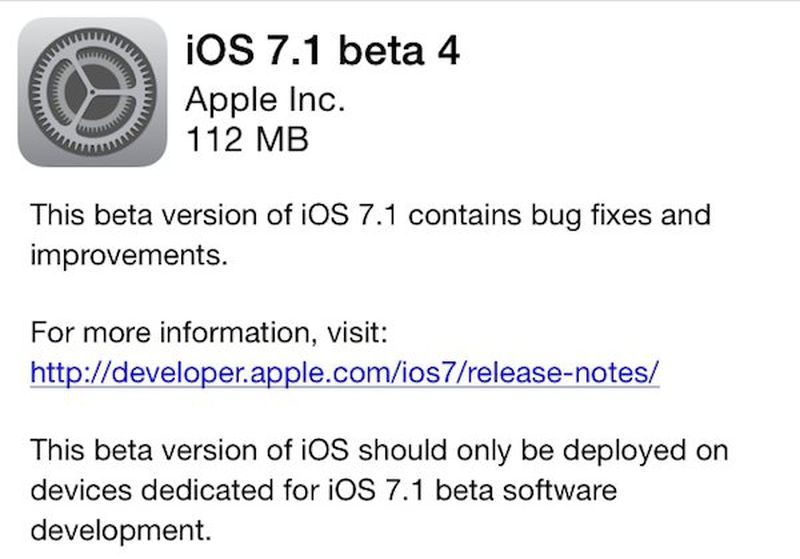 The last version of iOS 7 available to the public, iOS 7.0.4, was released back in November. There are still several known issues for Apple's engineers to address, so iOS 7.1 will likely not be released to the public without at least one more round of beta testing.

Today's update also includes Xcode 5.1 Developer Preview 4 and a new version of the Apple TV beta software. Earlier today, it was rumored that Apple would soon be releasing the next beta of iOS 7.1.

While there were a wide array of UI tweaks in Beta 3, it appears that Beta 4 focuses much more on behind-the-scenes changes. The only UI change our readers have been able to find so far is a modest tweak to the Slide to Unlock animation to make it "shinier".

_Refurbished_
Beta 4 is out. I really hope it fixes a few things:

- Make Safari snappier
- Yellow screens
- Image retention on the Mini
- Terrible battery life
- Safari icon
- All icons in general
- Middle east conflicts
- iMessage failures
- Steve would never have released Beta 4, only Beta 5. He would have skipped Beta 4.
- White. All the white. Please, someone save us from the white.
- Forces Ive to wear a crew neck
- Forces Nest to decline Google
- Reduces the use of words in keynotes, such as "Magical, Amazing, Wonderful"
Rating: 20 Votes

-LikesMac-
That was snappier than expected.

thadoggfather
Beta 4 I'mma let you finish and all, but how about that evasi0n though?

Is it safe? Is it secret?

furi0usbee
Shiny? Shiny does *not* go with flat.... that's all I need to see now, flat and shiny living side by side each other. Great.
Rating: 6 Votes


Seriously? Hitler jokes?
We are talking about languages including German, okay, no need to remind us of the dark past of Germany, even if it was just a joke... This man killed millions of people and other nations still associate every single German with Hitler; although we neither support his behaviour nor have ANYTHING to do with what he did...
Rating: 6 Votes

bkushner
Evasion patched. They should have waited until 7.1
Rating: 6 Votes

HelveticaNeue
Seems there is a new Photos icon too.


EDIT: Not new. Several blogs showed a new icon. It seems this is incorrect. My apologies.
Rating: 5 Votes

When will you people go away!?

In 40 years when apple goes out of business I'm sure you'll say 'it's been going down hill since Steve jobs left'.


It's absolutely 100% true. IOS 7 as we now know it wouldn't have made it to the public if Jobs were still here. Thats a fact.
Rating: 4 Votes

Seems there is a new Photos icon too. Image (http://static.iphoneitalia.com/wp-content/uploads/2014/01/BecXKAaIAAAzP7H.jpg-large.jpeg)