Apple today released iOS 7.0.4 for iPhone, iPad, and iPod touch, a minor update that includes a number of improvements and bug fixes for the operating system. According to Apple, the update repairs a bug that could cause FaceTime calls to fail for some users. 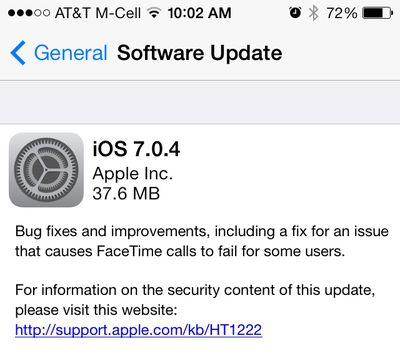 Bug fixes and improvements, including a fix for an issue that causes FaceTime calls to fail for some users.

Apple has also released iOS 6.1.5 for the fourth generation iPod touch, which fixes the same FaceTime issue. A new version 6.0.2 of the Apple TV software is also available, although it is unclear what has been changed.

iOS 7.0.4 comes just over three weeks after the release of iOS 7.0.3, which added support for iCloud Keychain and fixed accelerometer issues. iOS 7.0.4 can be downloaded via the software update tool in the settings menu on iOS devices.

This update almost bricked the 4s.

how did it almost brick your phone? Did it appear bricked and then a message up saying "JK!!"?
Score: 21 Votes (Like | Disagree)

dumastudetto
Well done Apple. The speed with which they issue updates and fixes is unparalleled in this industry.
Score: 21 Votes (Like | Disagree)


I wish we could go back to horses and carts. Can't stand these cars.
Score: 20 Votes (Like | Disagree)

6.1.5 for the iPod touch? I've never heard of Apple releasing an update for an older version of iOS. Kudos to them.

Yeah, real kudos to them. I'm really pleased that the 'FaceTime' bug has finally been fixed -- you know, the one everybody's been complaining about -- and yet they still find time to make an incremental update to last year's iOS.

I mean, forgetting the other bugs with iOS 7, such as Messages outright refusing to paste anything when you double-tap, issues with devices respringing if they're using a superior 64-bit chip, and the fact that Siri is utter, utter gash ... yeah, I just couldn't be happier for Apple. Good job, guys.
Score: 19 Votes (Like | Disagree)

Why would he be kidding?

Look at how often Android handsets get updated?

We've had 4 since iOS7 release 2 months ago. Averaging 2 per month. Not bad. Constant stream.
Score: 17 Votes (Like | Disagree)

Saturday December 3, 2022 10:23 am PST by Joe Rossignol
iPhone 12 Pro and Pro Max, iPhone 13 Pro and Pro Max, and iPhone 14 Pro and Pro Max models feature a LiDAR Scanner next to the rear camera that can be used to measure a person's height instantly in Apple's preinstalled Measure app. To measure a person's height, simply open the Measure app, point your iPhone at the person you want to measure, and make sure they are visible on the screen from...
Read Full Article • 84 comments