According to new data from the New York Police Department (via The Wall Street Journal), the rising theft of devices such as the iPhone and iPad remained one of the driving forces behind the high amount of grand larcenies last year in New York City. In detail, the data showed that Apple products were involved in 8,465 thefts and made up for 18% of all grand larcenies in the city, which rose 13% overall in 2013 from the year prior. 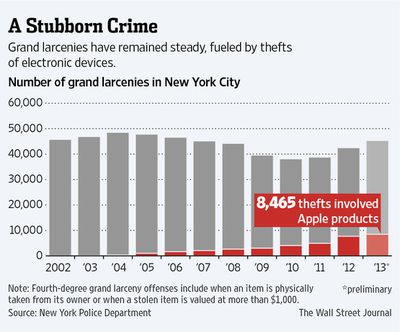 A spokeswoman for the company said Apple has "led the industry in helping customers protect their lost or stolen devices" since it launched its "Find My iPhone" app in 2009, which allows users to track a stolen phone and erase personal data remotely.

In 2012, former New York City mayor Michael Bloomberg released data showing that the theft of iPhones and iPads contributed to growth of the overall crime index for the city, as the police department recorded 3,890 more Apple product thefts than for the same period in 2011.

iPhone and iPad thefts continue to be a major issue for law enforcement, despite efforts to implement various theft deterrent programs. However, Apple's Activation Lock feature, which prevents stolen phones from being reactivated without an iCloud password, has received praise from various groups since its inclusion in iOS 7.

The New York City Council also announced in November that it was considering a pawn shop bill that would require second hand dealers and pawn brokers to maintain easily accessible electronic records of purchased items, however the status of the bill is currently unknown. Notably, a national phone database established last year was found to be largely ineffective against smartphone thefts in the U.S., with law enforcement authorities even pressing smartphone manufacturers to build a kill switch into phones.

gnasher729
Sadly, nobody in New York City seems to be any good at statistics, and they confuse correlation with causality.

Theft of Apple Devices is going up for the simple reason that there are more of them around. I bet not a single iPhone was stolen before 2007. I'd love to see the statistics for theft of hybrid cars; they must be skyrocketing since hybrid cars were introduced. By now they must massively outnumber the thefts of horse buggies.

The "rise of larcenies" in New York City is due to more people stealing stuff. And once they steal stuff, they steal stuff that is there.
Score: 29 Votes (Like | Disagree)

Bhatu
Tip: Cover the iPhone with a case that resembles Samsung phone ;)
Score: 28 Votes (Like | Disagree)

g0odfr1end102
Happened to me last month. Apple should add the option to enter password in order to switch the phone off. This way Find my iPhone could still do it job.
Score: 14 Votes (Like | Disagree)

Klae17
Hey, you know your product is successful when thieves want it.
Score: 9 Votes (Like | Disagree)


But I thought Android had all the market share and everyone was buying Galaxy's?
Score: 8 Votes (Like | Disagree)