The third beta of iOS 7.1 includes a feature that allows users to delete the over-the-air installation files that are automatically installed whenever an iPhone is connected to AC power, according to German site Macerkopf.de [Google Translation]. Deletable installation files will allow users who do not wish to upgrade their devices to new versions of iOS to free up valuable space on their devices.

Previously, updates downloaded over-the-air could not be removed, an issue that received attention in September after iOS 6 users were forced to install iOS 7 or lose 3.1 GB of storage space to the installation file. 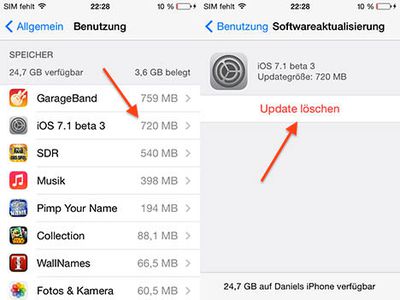 Users with iOS 7.1 beta 3 who have not installed the update will see it listed in the Settings menu, under General --> Usage, where it can be removed like any other app or file. The file can be deleted if it was downloaded over-the-air in the background or manually.

While over-the-air files can be deleted as of iOS 7.1 beta 3, there is a possibility that this is a beta-only feature that will not make it into the final release of the software. Apple often adds and removes features during the course of beta testing, such as the dark keyboard that was available in iOS 7.1 beta 1 and removed in beta 2.

First released to developers last week, iOS 7.1 beta 3 also includes a number of visual changes that give iOS 7 a revamped look and feel, including a redesigned Phone dialer, an improved keyboard, and darker colors for the Phone, Messages, and FaceTime apps. It is unclear when Apple plans to release iOS 7.1 to the general public, but a December report suggested the update could launch in March after a lengthy beta testing period.

Update: As several commenters have pointed out, the new feature is actually part of the second beta, as it is the download for third beta that can be deleted without ever being installed.

DipDog3
Need to make an update to iOS6 that allows us to delete the iOS7 "update"!
Score: 30 Votes (Like | Disagree)

MikhailT
This probably have to do with Apple getting sued by that iOS 6 user who lost space. He wanted his 3GB of space back and I can understand his PoV. Some devs need an iOS 6 devices to test their apps on, until they go iOS 7. They're forced to download iOS 7 without an option to turn it off.

And I don't agree with that. No update file should be downloaded to a users device without them approving it. It appears this is fixing that.


Too bad this feature is useless to the people it matters to most: users running iOS6.
Score: 12 Votes (Like | Disagree)

I don't really understand why someone would buy an iphone and then not want to have the latest software that leverages the hardware. For the 4 and 4s barely a maybe understanding, but for the 5, 5c, and 5s -- come on, you got the iphone, now update it and move on. I do hope they leave this in for developers. I totally get wanting to have phones at different iOS levels to test their apps.


People buy their phone knowing what the current software does. Far as I'm concerned if they don't wish to upgrade for whatever reason, they shouldn't have to upgrade...
Score: 11 Votes (Like | Disagree)

unplugme71
So you delete the file. Plug in your phone to AC power and it downloads it again? That's what I got from this article.

Why not just have a switch to prevent OTA updates vs app updates?
Score: 10 Votes (Like | Disagree)

You see, Apple DOES listen!


Albeit late. iOS 6 needed this.
Score: 9 Votes (Like | Disagree)
Read All Comments