According to the report, the Mac Pro uses power-efficient components that utilize less than half the allowable energy limit of the ENERGY STAR requirements for computers. It also uses 68 percent less power in idle mode than the previous generation Mac Pro, released in 2010.

Because one of the largest portions of product-related greenhouse gas emissions results from actual use, energy efficiency is a key part of each product’s design. Apple products use power-efficient components and software that can intelligently power them down during periods of inactivity. The result is that Mac Pro is energy efficient right out of the box.

Apple states that the Mac Pro's "ultracompact product and packaging designs" are at the forefront of the industry in terms of material efficiency and that its component makeup contains large amounts of aluminum and copper, which are desired by recyclers. The Mac Pro contains 3660 grams of aluminum and steel, 715 grams of copper, and 270 grams of plastics and uses 74 percent less aluminum than the previous Mac Pro.

Finally, Apple clarifies that all of its products, including the Mac Pro, comply with and exceed the European Directive on the Restriction of the Use of Certain Hazardous Substances in Electrical and Electronic Equipment, avoiding hazardous substances like brominated flame retardants and offering PVC-free internal cables and a PVC-free AC power cord in most regions.

The Mac Pro is the first Mac in many years to be manufactured in the United States, providing more than 2,000 jobs across 20 states. The computer is produced in Austin, Texas, in partnership with Flextronics.

Foxdog175
Why is a graph that explains all of the MP materials using wood textures?:confused:
Score: 49 Votes (Like | Disagree)

AngerDanger
But doesn't this data only apply to the Product (WOOD) Mac Pro? :confused: 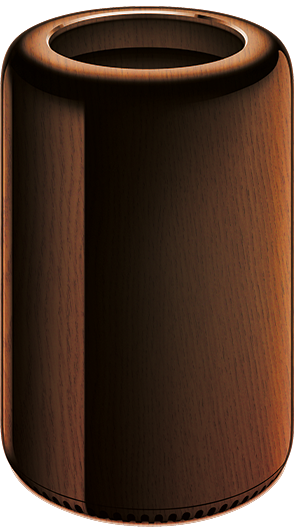 Why is a graph that explains all of the MP materials using wood textures?:confused:

Why are we pretending less aluminum is a good thing?


It uses less plastic than even copper. Less aluminum IS a good thing, overall it's just using less of everything.
Score: 17 Votes (Like | Disagree)

theluggage
OK, just being snarky, but that pie chart looks as if its hiding something under its sumptuous wood veneer.


Now children - two of those things are not the same sort of things as the other three things - can you see what they are?


So does 'Power Supply' represent the mass of pure powersupplyium* left after you've removed all the copper, plastics, steel and aluminium from the PSU and added those to the other figures? Likewise is 'circuit board' the bare board** with all the copper, components, sockets etc. scraped off? If so what are the components soldered on with - good intentions?


*Powersupplyium is well known to cause horn rot in unicorns.