Apple today added yet another set of channels to its Apple TV set-top box, including a "Watch ABC" channel to allow subscribers to certain cable services to watch content from their local ABC affiliate through Apple TV. Other additions include financial channel Bloomberg, streaming movie and TV show channel Crackle, and Korean channel KORTV. 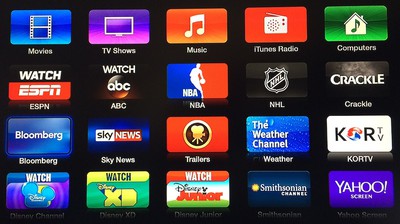 Today's launches are just a few of the many additions for Apple TV over the past few months, with the most recent previous addition having been Yahoo Screen and PBS last month. Other recent additions included Major League Soccer and Disney Junior in September, Vevo, Smithsonian, and Disney in August, and WatchESPN and HBO GO in June. Apple is also reportedly in talks to launch channels for cable provider Time Warner Cable and TV network The CW.

Update: 9to5Mac has a behind the scenes look at the development process for the Bloomberg channel.

Apple has already streamlined the process of building its current lineup of Apple TV apps— which mostly consist of streaming video content— to the point where developers can quickly and easy build apps through an easy to use SDK, much like on iOS. The team behind the development of the Bloomberg app, which consisted of two developers under Bloomberg’s head of mobile and connected devices Oke Okaro, told me that Apple’s toolkit, an SDK of sorts, has “made it quite easy to build the apps.” The team of two developers along with Okaro built the app in just five weeks. Most of that time was spent testing and optimizing the video experience.

Apple reportedly provided some input and feedback along the way in terms of optimizing the user experience, but largely allowed Bloomberg to define what it wanted to include in the channel.

0815
It's great that they keep adding channels/apps to the Apple TV .... but now they are at the point where a major UI rewrite is required, it is getting to cluttered and the 'channels' are not integrated, but instead separate without e.g. common search interface for shows/movies/... etc
Score: 31 Votes (Like | Disagree)

You can. Go into the Parental Restrictions in Settings. Hide apps.

This should be stickied into every Apple TV article.
Score: 17 Votes (Like | Disagree)

Would be great to have the ability to hide some of the channels not interested in, now that they have so many.


You can. Go into the Parental Restrictions in Settings. Hide apps.
Score: 17 Votes (Like | Disagree)

Sky Blue
Can we have a Plex channel please?
Score: 17 Votes (Like | Disagree)

cpatterson1177
Awesome, more channels that I can't watch because I don't subscribe to a cable or satellite service.
Score: 15 Votes (Like | Disagree)

Amazon, Plex, and the NFL. And this ashtray. The ashtray and the paddle game and that's all I need... And this remote control.
Score: 12 Votes (Like | Disagree)
Read All Comments

Thursday July 9, 2020 10:14 am PDT by Juli Clover
Apple today seeded the first public betas of upcoming iOS and iPadOS 14 updates to its public beta testing group, two weeks after first providing the updates to developers after the WWDC keynote and a day after seeding the second developer betas. Public beta testers who have signed up for Apple's beta testing program can download the iOS/‌iPadOS‌ 14 updates over the air after installing ...
Read Full Article • 136 comments

Wednesday July 8, 2020 3:14 pm PDT by Juli Clover
Apple is working on Macs that use its custom Apple-designed Apple Silicon chips instead of Intel chips, but Apple has committed to continuing to support Thunderbolt, reports The Verge. In a statement, an Apple spokesperson said that Apple's upcoming machines will offer support for Intel's Thunderbolt USB-C standard. "Over a decade ago, Apple partnered with Intel to design and develop...
Read Full Article • 195 comments

Wednesday July 8, 2020 1:49 am PDT by Tim Hardwick
A significant minority of iPhone users have taken to Apple's Support Communities and Reddit to report battery drain issues largely related to the Music app and high levels of background activity. Hundreds of users, many running iOS 13.5.1 on devices both new and old, are experiencing rapid battery drain when the Music app is not in use. In some cases, the background activity occurs over...
Read Full Article • 127 comments