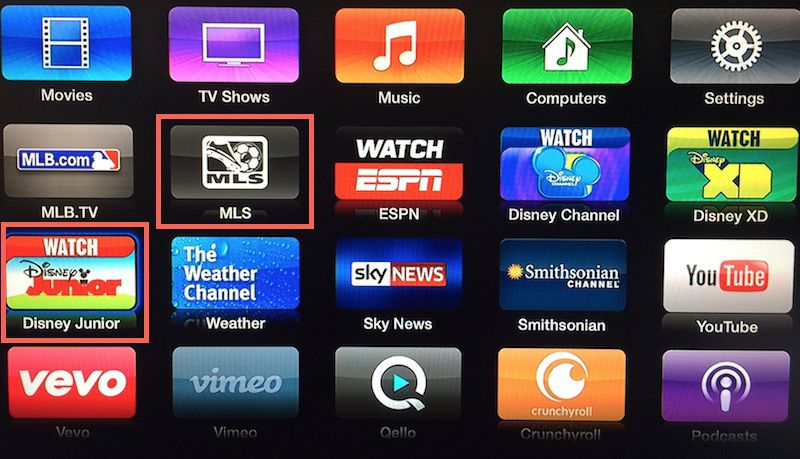 The MLS channel offers scores, standings, and video content from Major League Soccer, while also offering access to the MLS Live subscription program for live video of matches. MLS Live is priced at $24.99 for the season and a subscription can be used not only on the Apple TV but also on iPhone and iPad.

Today's additions are the latest in a long line of new channels introduced to the Apple TV in recent months. In June, WatchESPN, HBO GO, Sky News, Crunchyroll, and Quello were added, and last month Apple debuted channels for Vevo, the Smithsonian, and the first two Disney channels. Deals with TWC and The CW are also said to be in the works.

MacGeek1987
Always great to add more content, but I look forward to when I can pay a reasonable fee to Apple or another company for TV stations à la carte.
Score: 14 Votes (Like | Disagree)

Battlefield Fan
Whats the point if you need a cable or satellite subscription?
Score: 13 Votes (Like | Disagree)

zorinlynx
I wish half of this crap didn't require cable subscriptions. Why the heck can't I just pay Apple $20 a month or something and get access to all this stuff? They can divide the money appropriately based on how much of each channel I watch.

Apple wins, the networks win, and I win, by not having to pay for a bunch of other content I don't need as well.

But nooooo, the media conglomerates don't want to give up their outdated business models. :(
Score: 13 Votes (Like | Disagree)

If they are going to keep adding apps like this, they need to provide a better way to manage them. I won't use most of the recent additions (I don't have a cable subscription and don't watch most professional sports), and the current means of hiding apps is more cumbersome than it needs to be.
Score: 11 Votes (Like | Disagree)
Read All Comments

Wednesday April 8, 2020 9:23 am PDT by Juli Clover
Customers who require a replacement AirPod from Apple have in some cases been receiving an AirPod running 2D3 firmware, which is not a version of the AirPods firmware that's been publicly released. As described on the MacRumors forum and Reddit (via iMore), customers who get an AirPod with the 2D3 firmware are unable to pair it with the existing unreplaced AirPod, leaving the AirPods unable...
Read Full Article • 89 comments

Thursday April 9, 2020 7:32 am PDT by Joe Rossignol
LG today announced pricing and availability for its 2020 NanoCell TVs with AirPlay 2 and HomeKit support in the United States. The first 4K models are rolling out now, with pricing starting at $599 for a 55-inch model. The entire 4K lineup will be released by September, including up to an 86-inch model for $3,299. 8K models will also be rolling out in May and June, including 65-inch and...
Read Full Article • 114 comments

Tuesday April 7, 2020 10:06 am PDT by Juli Clover
Apple today released iOS and iPadOS 13.4.1, minor updates that come two weeks after the release of iOS and iPadOS 13.4, major updates that introduced iCloud Folder Sharing, a new Mail toolbar, trackpad support for the iPad, and more. The iOS and ‌iPadOS‌ 13.4.1 updates are available on all eligible devices over-the-air in the Settings app. To access the updates, go to Settings > General...
Read Full Article • 115 comments