The CW has struck a deal that will bring the network's content to the Apple TV, reports Deadline. At the company's annual Upfront Presentation in New York today, CW president Mark Pedowitz announced that the CW's TV Now applications, which are currently available on Xbox 360 and Windows 8, will be coming to the Apple TV as well.

"This year we're reaching more viewers on more platforms," said Pedowitz, speaking of the deal. "We are reaching our audience everywhere they are, and we want you to be with us everywhere we go," he went on to say to advertisers at the event. 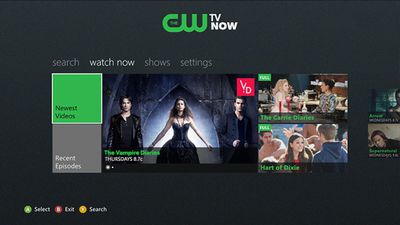 The CW told MacRumors that the app will function similarly to the company's Xbox and mobile apps and confirmed that it will indeed be an app located on the Apple TV's home screen.

It's a dedicated CW app that will work like our Xbox and mobile and tablet apps - no cable authentication required, full episodes of our shows available next day after air, ad-supported.

While the Apple TV offers apps and digital content from sites like Netflix and Hulu, it does not include apps from television networks. The partnership between the CW and Apple will mark the first network television app available via the Apple TV.

It is unclear if the CW's app is part of a larger initiative by Apple to bring additional apps to the Apple TV. The CW is a joint venture between Warner Bros. Entertainment and CBS, one of the biggest U.S. broadcast networks.

According to the CW, the app is set to launch in the coming weeks, though no exact release date was given.

Bozley0621
My husband and I enjoy Arrow, which is a CW Network show, that we discovered on Hulu. CW is the only network that we don't receive OTA on our antenna
Score: 9 Votes (Like | Disagree)

Eduardo1971
I guess if I were a teenage girl this announcement would have interested me.

Since I'm not, I don't find this announcement enticing.

Nonetheless, it pretty cool that I'll be getting a new icon on my Apple TV (it just blows that none of their shows interest me)-even better still is that a network station has signed aboard!

Now I'm just hoping that this brings forth other network stations to the Apple TV.
Score: 8 Votes (Like | Disagree)

macs4nw
One can hope, that this is the beginning of a trend; advertising supported tv viewing on any internet connected device, without the cable/satellite middlemen involved. The stuff we've been dreaming of.

Daws001
Anywho, this is good news. I like Supernatural and Arrow. I've been meaning to check out Nikita.
Score: 7 Votes (Like | Disagree)