Apple today published a Report on Government Information Requests [PDF], outlining statistics on government and law enforcement requests it has received seeking information about individual users or devices from January to the end of June.

We believe that our customers have a right to understand how their personal information is handled, and we consider it our responsibility to provide them with the best privacy protections available. Apple has prepared this report on the requests we receive from governments seeking information about individual users or devices in the interest of transparency for our customers around the world.

According to the data, Apple received 3,542 device information requests, for 8,605 devices. Apple provided data for 88 percent or 3,110 of those requests. The company also received between 1,000 and 2,000 requests for account information for 2,000 to 3,000 accounts, but is unable to disclose the information that it provided. Apple also provided information for law enforcement agencies in a number of other countries. 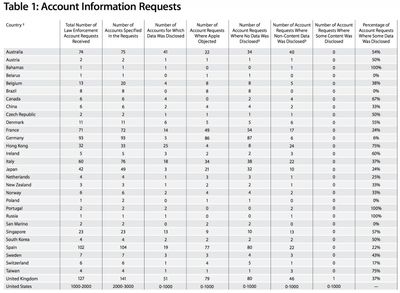 Click for Full Size
Apple reports that it has published all of the information that it is legally allowed to share, which does not include the number of national security orders, the number of accounts affected by orders, or the content disclosed. Apple notes that it is continuing to seek greater transparency in government, to attempt to provide better privacy disclosures to customers.

Apple's disclosures come following news of a top secret intelligence data gathering program called 'PRISM', which was revealed in June. A number of tech companies, including Apple, were accused of providing the government with direct access to user data.

In response, Apple published a statement of "Commitment to Customer Privacy" denying its participation in PRISM and teamed up with a number of tech companies to form an alliance requesting greater NSA surveillance transparency, allowing it to provide customers with regular reports on security related requests.

Apple and other companies also met with President Obama in August to discuss privacy issues and government surveillance. Most recently, Apple and 30 other technology corporations signed a letter urging the U.S. Congress to pass the Surveillance Order Reporting Act of 2013 and the Surveillance Transparency Act of 2013, which would result in increased surveillance disclosures and would give technology companies the right to publish detailed statistics on demands for user data.

Update: As noted by FOSS Patents, Apple has also filed an Amicus brief with the Foreign Intelligence Surveillance Court in support of a group of cases (filed by Microsoft, Yahoo, Facebook, and LinkedIn) requesting greater transparency. "The Court should declare that the providers have a right to disclose accurate information about the number of national security requests received and the number of user accounts affected," reads the brief.

TechCrunch also notes that Apple has cleverly specified in the report that it has not "received an order under Section 215 of the USA Patriot Act" and would "expect to challenge" such an order if served. If the section 215 disclosure disappears from future privacy reports, it will potentially serve as a "warrant canary" indication that Apple did indeed receive an order under section 215.

I live in such a transparent place. Go go government.
Score: 21 Votes (Like | Disagree)


Without privacy, there can be no freedom - and the American government is taking away that privacy from the entire population of the world. Just ask yourself how free you would feel if the NSA installed microphones and video cameras in your house - because that is exactly what they are doing behind their smoke screen.
Score: 12 Votes (Like | Disagree)

Yes, yes there is. Look up "National Security Letters (http://en.wikipedia.org/wiki/National_security_letter)". The US Federal Government has a subpoena process where the target of the subpoena can't acknowledge the request was made at all. They can't tell the subject of the subpoena (the individual Apple customer whose personal information was requested,) they can't tell *ANYONE*. They can't even acknowledge that they have received one of these letters.

The process for appealing these is very secretive, and it is extremely difficult to get permission to even acknowledge you have received such a letter - much less any actual detail about it.

See the uproar over Lavabit (http://arstechnica.com/tech-policy/2013/10/lavabits-appeal-were-actually-not-required-to-wiretap-our-own-users/) - it took them over two months of extreme pressure by their lawyers to get permission to acknowledge that they had gotten one of these requests. And most likely, the only reason they got permission to publish was because they chose to shut down their company rather than comply with the request. That shut down (which, at the time, they could not comment why they had shut down,) got a lot of press. Everyone assumed it was because of a "secret subpoena", so it did no harm to acknowledge it. (In the end, even though they shut down their company, they still had to comply with the request, despite many efforts to avoid it.)


Thank you for making an informed post. Most of these replies are incredibly naive.
Score: 10 Votes (Like | Disagree)

50548
Kudos to Apple for being as transparent as possible on this - but of course one has to paraphrase Phil Schiller, given that the only "obscure" exception in that report is the USG's "data":

Now where is Ron Paul when we need him?
Score: 10 Votes (Like | Disagree)


The best prisons, are built without bars
Score: 8 Votes (Like | Disagree)

Sounds like a coverup. They may have given them nothing, or it all.

All the other countries have detailed information, then the US is just a range of data??? Come on now.
Score: 8 Votes (Like | Disagree)
Read All Comments