A promotion occasionally visible on the Colombian App Store suggests Apple will soon be releasing an updated version of the Remote app that allows control of Apple TV and Mac/PC iTunes installations from iOS devices, complete with an iOS 7 redesign.

It's not the first hint that Apple has a redesign in the works -- some users have noticed that the most recent release of iTunes has a new Remote icon as well. 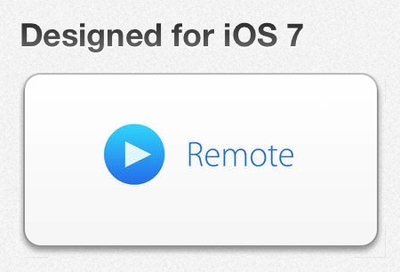 The last major update to Remote occurred nearly a year ago with support for iTunes 11, with a bug fix release coming this past January. Last week, Apple released updates for Podcasts, iTunes Movie Trailers, and Find My iPhone apps with iOS 7 redesigns, along with redesigned versions of the iWork and iLife suites.

Aside from Remote, iBooks, iTunes U and Find My Friends are also awaiting iOS 7 redesigns.

Remote is a free download from the App Store. [Direct Link]

Tyler23
You forgot iBooks, that needs an update too.

Leave Mac OS X alone, we (I) don't need these crappy Icons in OS X, leave that for iOS (Toys).

Aside from Remote, iBooks, iTunes U and Find My Friends are also awaiting iOS 7 redesigns.

You forgot about Keynote Remote as well. Edit: And iTunes Connect
Score: 5 Votes (Like | Disagree)

Aside from Remote, iTunes U and Find My Friends are also awaiting iOS 7 redesigns.


So is iBooks for christ's sake.
Score: 5 Votes (Like | Disagree)

Leave Mac OS X alone, we (I) don't need these crappy Icons in OS X, leave that for iOS (Toys).