After Apple announced support for an upcoming "Made for iPhone" (MFi) program supporting certified game controllers using new APIs in iOS 7, a report indicated that Logitech and MOGA were among the first wave of companies to be working closely with Apple on such accessories.

Logitech's controller has been seen several times already, and now a photo of MOGA's offering has been leaked on Twitter by @evleaks. Apparently called the "MOGA Ace Power", the enclosure controller reportedly includes an integrated 1800 mAh battery and the photo reveals not only the traditional D-pad on the left front and buttons on the right front and shoulders of the device, but also dual thumbsticks on the left and right front.

A second photo shows the controller in closed mode when the iPhone has been removed.

Apple has yet to officially announce the launch of its MFi program for game controllers, but it is clear that third-party manufacturers are gearing up to launch their products. Companies such as ClamCase and Logitech have been teasing their offerings, suggesting that a launch may be rather close, but launch details for the devices have yet to be revealed.


I just ordered the Moga Pro for my Note 3, having the controls either side of the phone just looks ungainly to me, as this looks so similar to an Xbox 360 Controller I'll be right at home :D 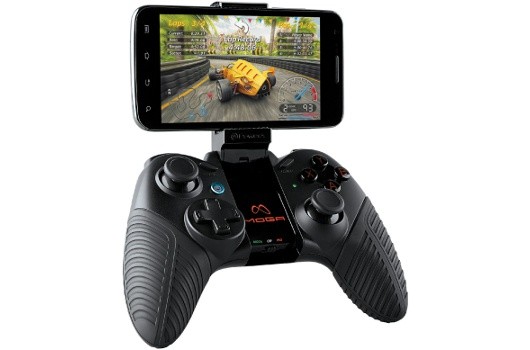 
For Nintendo that would make no sense at all
Score: 5 Votes (Like | Disagree)

Motawa
Why do these mfi controller news always end up into a Nintendo thread??? Stop it!
Score: 4 Votes (Like | Disagree)

This isn't a question of being careful, this fight is done. No one is going to buy a portable gaming platform when the phone in their pocket is more powerful and now has a better controller attached to it. It will be the android devices and the iphones that win this war. Sony and Nintendo will have to drop their portable devices in two years. They won't be able to afford to do the R&D for a next generation version. Nintendo will at least be able to make software for the iPhone and make more money of it there than they would have on their hardware. So it isn't the end of them by any means.

Really - get a grip on mobile gaming and stop regurgitating that Jobs/Schiller-fed-BS of "Apple is the #1 mobile gaming platform!"
Score: 4 Votes (Like | Disagree)

radiohead14
hmm.. looks like a copy of the phonejoy

Saturday March 6, 2021 7:33 am PST by Joe Rossignol
Apple on late Friday evening added a "while supplies last" notice to its iMac Pro product page worldwide, and removed all upgrade options for the computer, leaving only the standard configuration available to order for now. We've since confirmed with Apple that when supplies run out, the iMac Pro will no longer be available whatsoever. Apple says the latest 27-inch iMac introduced in August...
Read Full Article • 202 comments

Friday March 5, 2021 10:14 pm PST by Eric Slivka
Apple appears to be on the verge of discontinuing the iMac Pro, with the store page for the high-end all-in-one Mac including a "While supplies last" tagline and only the base model with no custom configurations available for purchase. The iMac Pro launched in December 2017, and while there have been a few tweaks to the available configurations over the years, it has received no substantial...
Read Full Article • 133 comments