Earlier today Apple sent out invitations to its October 22 media event, which is expected to focus on the fifth-generation iPad and the iPad mini 2. The event will be held at the Yerba Buena Center for the Arts in San Francisco, but as it did with the iPhone launch, Apple plans to stream the proceedings to a separate London satellite event that international media members have been invited to attend (via 9to5Mac).

For the iPhone event, Apple sent out invitations to media in Berlin, Tokyo, and Beijing, hosting satellite launches in each country. Each event featured a video stream of the announcement in Cupertino, and it is likely the London event, which begins at 6PM local time at the Kings Place hall, will be run in a similar manner. 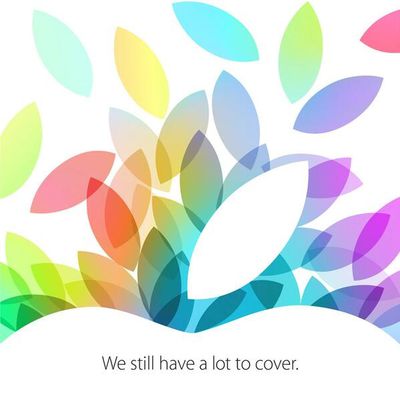 Along with the London stream, Apple is said to be setting up live streams for its employees to watch the event in Apple offices around the world, and the company will also offer a replay of the event on its website and iTunes after the event has concluded.

Apple did not provide a live stream of the September 10 iPhone event to employees, nor did the company provide an event stream for iOS devices and the Apple TV. In the past, however, Apple has streamed its events live to customers. For example, the 2012 iPad event was available via its website for Mac and iOS users, and there was a dedicated channel on the Apple TV. Apple also streamed its WWDC announcement to the Apple TV.

Apple has not yet announced plans to provide streaming coverage of the event to the general public for the upcoming October 22 event, but it is possible that live streaming will be available given the company's plan to provide feeds for employees.

Update: According to Gizmodo Japan [Google Translate], Apple will also be holding a gathering for members of the Japanese media.

Apple has been really nit-picky and restrictive LATELY about streaming their events....WHY APPLE? You used to do this all the time for the general public via online stream...and now NOTHING??? Really, Apple? Shows lack of care for their customers and fan base.

Why do they need a big huge event for a lame iPad iteration that did nothing but bump up the processor and get rid of the useful side bezels?


Why is it that you are even on these forums? Just about every post I have read of yours has been negative and not at all helpful to a discussion. Maybe you should consider going to another site. Honestly, some of us are just tired of your comments and trolling.
Score: 16 Votes (Like | Disagree)

WardC
Apple has been really nit-picky and restrictive LATELY about streaming their events....WHY APPLE? You used to do this all the time for the general public via online stream...and now NOTHING??? Really, Apple? Shows lack of care for their customers and fan base.
Score: 16 Votes (Like | Disagree)

Why don't they use their "never used by anyone" FaceTime.


Obviously, you do not travel. I use it every time I am away on business.
Score: 7 Votes (Like | Disagree)

Why do they need a big huge event for a lame iPad iteration that did nothing but bump up the processor and get rid of the useful side bezels?


Nexus user by any chance?
Score: 6 Votes (Like | Disagree)

Apple has been really nit-picky and restrictive LATELY about streaming their events....WHY APPLE? You used to do this all the time for the general public via online stream...and now NOTHING??? Really, Apple? Shows lack of care for their customers and fan base.

I believe that they have only streamed the September 2012, October 2012, and WWDC '13 events.
Score: 6 Votes (Like | Disagree)
Read All Comments