Both Apple's iPhone and iPad continue to remain popular with U.S. teenagers, according to Piper Jaffray analyst Gene Munster's latest semiannual teen survey. 55 percent of teens now own an iPhone, compared to just 48 percent from a survey conducted in April and 40 percent in the fall of 2012.

Our most recent semi-annual Teen survey demonstrates that Apple remains the most popular tech brand amongst teens. As of Fall 2013, the iPhone represented nearly 55% all phones used by teens and the iPad family remained at close to 70% share of tablet ownership. We believe that while Samsung seemingly had some momentum with teens over the past year, Apple's brand and product quality has enabled it to remain the top choice for teen consumer electronics.

When it comes to tablets, 56 percent of teens own one, up from 51 percent in April. 68 percent of those own an iPad (60% full-sized, 8% mini), which is the same percentage that owned an Apple tablet in the spring, though ownership has shifted slightly towards the mini (63% full-sized, 5% mini).

As for future ownership, 65 percent of teens expect their next phone to be an iPhone, up from 62 percent. Of teens that expect to get a tablet in the next six months, 64 percent plan to get an iPad. Android tablets have seen increasing interest from the younger age group as well, thanks to low-priced options like the Kindle Fire HD. 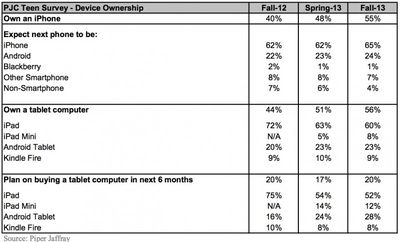 For those teens who expect to purchase a tablet in the next 6 months, 64% said they plan on buying an iPad, thus it appears that Apple should be able to maintain its tablet share. Given iPad segment ASP changes, it is apparent that the iPad Mini is growing in popularity; however, based on the purchase intent for teens, it appears that the full-sized iPad remains highly desired. We note that a design change in the near future could help demand and consequently ASPs.

Though Samsung has attempted to portray the iPhone as a device for "uncool" parents, Munster's newest survey suggests that the iPhone continues to gain market share among teens while Android phones become less popular with the group.

Younger customers have always been important to Apple as it gives the company a chance to create lifelong customers. Apple's recently released iPhone 5c seems to be targeted at a younger crowd in particular, with its lower price point and colorful design.

Though iPads have lost market share among teenagers over the last two years, they could see a significant popularity surge in the future, as Apple prepares to launch a redesigned fifth-generation tablet iPad and a Retina iPad mini.

rdlink
Or maybe people just want their phone to work for them, instead of the other way around…

I'm a tech person. A very successful and well paid tech person. I've bought, owned and sold 6 Android devices (Actually gave 2 of them away). But when I want a phone that works and does what I need it to do, I use an iPhone.

I don't need to impress you or anyone else with my tech prowess. I just need my device to be reliable, secure and work well.
Score: 8 Votes (Like | Disagree)

BTW that article has disappeared from their own marketing website...wonder why Tina Wells...wonder why. Apple insider posted this...great piece on it.

The continued U.S. growth of iOS at the expense of Android and Blackberry is also noteworthy given that this summer was marked by incessant reports of Apple's supposed failure to "innovate," along with frequently stated concerns about Samsung's purported encroachment upon Apple's business.

Among these memes was a widely published report stating that 'teens no longer found Apple "cool,"' instead preferring Samsung's Galaxy brand along with Microsoft's Surface. After months of being broadly syndicated, largely without criticism, that headline now generates 189 million search results from Google.""Teens are telling us Apple is done” - Tina Wells, Buzz"

Those reports can be traced back to one source: Buzz Marketing Group, run by Tina Wells, who issued the report and was subsequently quoted by Fortune as saying "Teens are telling us Apple is done.”

Wells added, "Apple has done a great job of embracing Gen X and older [Millennials], but I don’t think they are connecting with Millennial kids [who are] all about Surface tablets/laptops and Galaxy."

Since January, however, Apple's iPhones subsequently outsold Samsung's higher end Galaxy phones, despite a series of flashy new product launches and aggressive smartphone discounting and promotion by Samsung. Meanwhile, the Surface turned out to a huge dud for Microsoft across all demographics, generating a write-off of nearly a billion dollars.

All mention of the "iPhone isn't cool" study, which was formerly prominently featured on the research firm's website, has since been removed.
Score: 8 Votes (Like | Disagree)

Dumb people use difficult to use devices.

To say that Apple users are simple minded because they value a well designed product is ... Well simple minded.
Score: 4 Votes (Like | Disagree)

Or maybe people just want their phone to work for them, instead of the other way around

I'm a tech person. A very successful and well paid tech person. I've bought, owned and sold 6 Android devices (Actually gave 2 of them away). But when I want a phone that works and does what I need it to do, I use an iPhone.

I don't need to impress you or anyone else with my tech prowess. I just need my device to be reliable, secure and work well.

All tech has SOME learning curve for new or migrating users.
Score: 4 Votes (Like | Disagree)

Image (https://cdn.macrumors.com/article-new/2013/10/teensurveyiphonesipads-800x483.jpg)Though Samsung has attempted to portray (https://www.macrumors.com/2012/09/19/samsung-releases-new-galaxy-s-iii-ad-poking-fun-at-iphone-5-launch/) the iPhone as a device for "uncool" parents, Munster's newest survey suggests that the iPhone continues to gain market share among teens while Android phones become less popular with the group.

More of them own an iPhone than in Spring 2013 (55% versus 48%). But the chart doesn't mention Android ownership. It does show that in Spring 2013, 23% thought their next phone would be Android. In Fall 2013 it's now 24%, so that's actually *more* popular in terms of future purchase plans (although I'm sure that it doesn't even fall into the margin of error, so it's basically no change).

Kid Red
These stats are why I laugh (in a bad way) at the Nokia commercials where the 1 dude says to the 50+ year old lady "aren't you a little young to have an iPhone". Nokia is trying to say iPhones are for old people I guess, but they are way too trendy among the youth to make that commercial credible.
Score: 4 Votes (Like | Disagree)
Read All Comments