Piper Jaffray analyst Gene Munster today released the results of his semi-annual survey of U.S. teenagers, finding that iPhone and iPad usage remains strong among the 5,200 teens included in the study. According to the report, 48% of teens now report that they are using iPhones, up from 40% just six months ago. 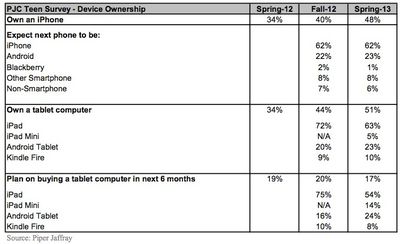 In looking at tablets, 51% of teenagers now report using a tablet, up from 44% six months ago. Of those 51%, 63% are using full-size iPads and 5% are using iPad minis, meaning that nearly 35% of teenagers in the survey are currently using Apple tablets.

For those teens that expect to purchase a tablet in the next 6 months, 68% said they plan on buying an iPad, thus it appears that Apple should be able to maintain its tablet share. The iPad Mini is beginning to show its impact as the 68% of those who plan to purchase break down into 54% for full sized iPads and 14% for iPad Minis. We would expect the iPad Mini to continue to cannibalize the full sized iPad in our continuation of the survey as we expect the breakdown in sales to reach 50/50 in the March quarter.

Samsung has attempted to play up its appeal with younger consumers through ads portraying the iPhone as uncool, with one ad poking fun at Apple fans waiting in line for the latest gadget by showing one Samsung user in the line actually saving a spot for his parents. But Piper Jaffray's results suggest that the iPhone and iPad brands remain strong with U.S. teenagers, with Apple undoubtedly planning for those users to become lifelong Apple customers as they become locked into the company's app and content ecosystem.

I was just in Asia and the vast majority of people we saw were on the Galaxy Note II. Apple needs to step it up on the innovation curve otherwise I think there's a rocky road ahead.


This topic says the United States I believe.
Score: 11 Votes (Like | Disagree)

Hardly a ground breaking survey when only 5200 teens were surveyed!


Show us how complicated your toilet is, please.
We need to know how a sophisticated person poops!
Score: 7 Votes (Like | Disagree)

komodrone
I wasn't allowed to own a tamagotchi until I was 18.
Score: 7 Votes (Like | Disagree)

rebe1
Uhuh, you were in "Asia". I think you need to define where in Asia you were at, because Asia is pretty big and consist of many countries.

I just came back from Thailand, and the majority of the people had an iPhone 5 (Yes I was surprised), or iPhone 4/4S. Also noticeably owned were also Galaxy's, but definitely not as much as iPhones. iPads were everywhere. This was also the same in Japan and HongKong, although I'm pretty sure I saw more Galaxy's being owned in HongKong.

BTW, it was great that I can get a nano sim and a week of 1GB 3G usage (ultd. edge speeds afterwards) for my iPhone 5 for equivalent of $7USD, and a second week for another $5-6USD. That's including the nano sim card, at the Bangkok International airport!

I was just in Asia and the vast majority of people we saw were on the Galaxy Note II. Apple needs to step it up on the innovation curve otherwise I think there's a rocky road ahead.