Apple today announced its next-generation flagship phone, the iPhone 5s. As with all of Apple's iPhone updates, the iPhone 5s will come equipped with several impressive camera improvements, both hardware and software-based.

While the iPhone 5s still uses an 8-megapixel camera, it utilizes a sensor that has a 15 percent larger surface area, which means it will produce higher quality photos in low-light conditions. It also has a 5-element lens with an aperture of f/2.2, an improvement over the iPhone 5's f/2.4 aperture and the pixels are larger, at 1.5 microns, for better light absorption. All in all, the iPhone 5s has a 33 percent increase in light sensitivity.

The new iSight camera on iPhone 5s builds on the iPhone 5 camera in ways that make a real difference to your photos. It captures beautiful images at 8 megapixels. What makes them beautiful is a redesigned camera sensor that allows for bigger pixels. Bigger pixels equal better photos. And better photos are precisely what inspired the advancements we made with the new iSight camera on iPhone 5s.

Most smartphones, Apple's iPhone included, are known for having a notoriously bad flash that washes out pictures, but that is no longer the case with the iPhone 5s. The iPhone 5s uses a "True Tone" dual-LED flash that supports two different cool white/warm amber color temperatures for improved white balance and more than 1,000 different color temperatures. The phone’s app captures exposure and creates what Apple calls a "dynamic local tone map" to create pictures that are properly hued. 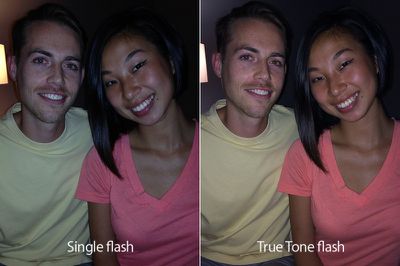 Autofocus has been improved as well, using 15-zone matrix metering for speedier focusing times, and software-based image stabilization has been built-in too. As with the iPhone 5, the iPhone 5s has a sapphire-crystal covered lens designed to withstand scratches and other damage.

For capturing action shots, the iPhone 5s utilizes a new Burst Mode. This mode captures 10 photos per second, combines them to get an accurate light level, and then automatically chooses the best of the bunch.

There's also a new "Slo-Mo" mode, designed to capture 720p video at up to 120 frames per second with 3x live video zoom. Slo-Mo video and regular video can be combined to create all new video effects. In Panorama mode, the iPhone 5s can capture 30 frames per second, which is a 50 percent improvement over the iPhone 5.

The iPhone 5s will ship with iOS 7, which brings several camera improvements itself. iOS 7 includes eight Apple-designed live filters and a redesigned photos app that groups pictures based on time and location.

ghettochris
I'm glad to see them keep the megapixels the same as they try and improve the quality of photos. f/2.2, bigger pixels and a color adjusting flash should make a lot of pictures much better.
Score: 23 Votes (Like | Disagree)

Velin
Who cares about all of this? If I want to be shooting movies or putting together photo albums, I'll get a videocam or SLR.

This is a phone. It's a communication device. Where's HD voice? Improved speakers so I can hear speakers on the other end? What about improvements in antenna and reception? Speakerphone? WiFi hotspot ease of use?

How about wifi-calling across all wireless carriers? Where was additional presentation about ios7 improvements and how they work with the new iPhone. Any improvements in Mail, instant messaging, voicemail, anything at all that improves the iPhone as a communications device?

Presentation sucked, all I saw was junk about video games and dual flash for photos that no one cares about. Candy for people who like to waste time. This is a phone.
Score: 22 Votes (Like | Disagree)

See this is where Apple shines. For all the hate I see in these forums Apple will continue to do very well because they release products that are consistent, appeal to the masses, and are reliable. I am underwhelmed by today as far as huge gimmicks go, but that's when I stop and realize I don't want gimmicks. I want to pick up my phone and have it shine in the categories of typical use. After having a 4s, GSIII, HTC One, and now iPhone 5 I am "educatedly" convinced Apple makes the best phone and will continue to do so.

Keep it up Apple, way to not try releasing crap like Galaxy Gear just cause the market clamors for useless devices.

gadget123
The camera looks impressive and nice to see they avoided the typical mega pixel bump and realised 8mp is satisfactory.
Score: 16 Votes (Like | Disagree)

Who cares about all of this? If I want to be shooting movies or putting together photo albums, I'll get a videocam or SLR.


the best camera is the one you have with you.

I shoot a lot with my SLR, but most times I'm just out with friends i'm not gonna lug it around, but I will have my phone with me and if it captures a better photo than all the better
Score: 15 Votes (Like | Disagree)


My iPhone 5 has HD voice so I would think the iPhone 5S would have it also.
Score: 14 Votes (Like | Disagree)
Read All Comments