With Apple set to introduce its iPhone 5S and iPhone 5C at next Tuesday's media event, part leaks are continuing to appear revealing information about the devices. The latest part to appear is alleged to be the logic board for the iPhone 5C, completely assembled but unfortunately with shielding in place that keeps most of the chips and other components hidden.

One set of photos was shared by C Technology, showing front and rear views of the part as well as a shot of nearly a dozen of the parts laid out on a table. 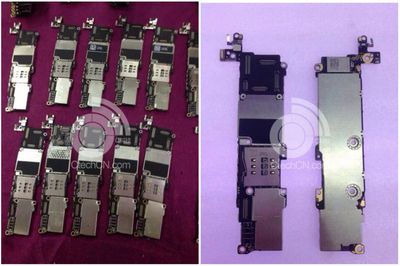 Click for larger
A second set was posted (registration required) to Chinese microblogging site Sina Weibo (via Nowhereelse.fr), again showing the front and rear of the board.

Click for larger
Perhaps most interestingly, the features that can be seen on this iPhone 5C logic board reveal it to be extremely similar to the iPhone 5S logic board seen months ago in bare form and in a prototype device.

Leaked shells for the iPhone 5S and 5C have shown identical layouts for screw holes used to mount the respective logic boards, but today's photos show that even the physical connectors and components on the board itself are laid out in the same positions and orientations, at least as far as can be discerned with the shielding in place.

The iPhone 5S is expected to carry more advanced hardware than the iPhone 5C, with the iPhone 5C having been said to essentially be an iPhone 5 wrapped in a new plastic shell. But if these images are indeed accurate, it appears that Apple has reworked those iPhone 5 components to fit onto a new basic logic board design that is shared between the two new iPhone models.

How do you always have the 1st comment of every front page story? :confused:

Michaelgtrusa
"Stop me if you've seen this" Steve Jobs.
Score: 16 Votes (Like | Disagree)

Every day, with more and more parts being leaked, iFixit's job of disassembling an iPhone 5S/5C becomes less mandatory. With all the leaks we have seen so far fro these upcoming phones, one could literally remake the iPhone 5S/5C from the pictures shown.

This has to be the most leaked iPhone in the history of the iPhone's existence.

Sorry if i sound condescending, but this is getting ridiculous....

Tuesday will tell us if these rumors are rumors or if they are indeed legit news for the new phones...


The most leaked iPhone was the iPhone 4. A completely working phone was leaked.
Score: 11 Votes (Like | Disagree)

Zerilos
Couldn't this just mean that the logic board we saw months ago was for the 5c and not the 5s?
Score: 7 Votes (Like | Disagree)

"Stop me if you've seen this" Steve Jobs.