As noted by Mac Otakara, Japanese parts firm Moumantai has posted three photos of what may be the bare logic board from the iPhone 5S. Unsurprisingly, the shape of the board is nearly identical to that of the iPhone 5 logic board, although it appears to have a slightly different curve along the bottom edge where the logic board would meet the speaker enclosure. 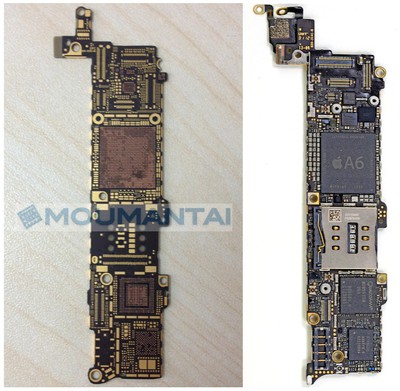 Front of claimed iPhone 5S logic board compared to iFixit's iPhone 5 logic board photo
Few details can be obtained from the part, as there are no chips or other components attached to the board, although it does contain a somewhat different placement of screw holes and a tweaked chip layout. The main A-series chip appears as if it will be slightly larger in area than the A6 seen in the iPhone 5, as it takes up a greater width of the logic board.

Rear of claimed iPhone 5S logic board compared to iFixit's iPhone 5 logic board photo
Apple's iPhone 5S is expected to launch later this year, perhaps around the September timeframe. Following Apple's pattern of two-year body style cycles, the iPhone 5S will reportedly appear very similar to the iPhone 5 and focus on internal improvements. One differentiating feature may, however, be a fingerprint sensor, which is rumored to be location on or near the device's home button.

Update 8:32 AM: As noted in our forums by chrmjenkins, the logic board may actually be slightly narrower than on the iPhone 5, meaning that the main A-series chip may be the same size as the A6 in the iPhone 5.

I think the logic board has gotten narrower. Notice how the A6 has room for a triple row of caps to its left? The new logic board only has room for a single row (caps being placed longways, granted). Also, the back of the iPhone 5 logic board has the Hynix memory module spanning the whole board. Now since the board is thinner, it's been forced to rotate 90 degrees to fit since it's longer than it is wide.

Who cares, it will be running iOS 7 which is garbage! #BoycottiOS7

Weird, I'm sure Apple made improvements in virtually every single aspect of iOS 7 over iOS 6, and I'm also sure I logged into MacRumors, not twitter.

Must be my computer playing up. Restarting now...
Score: 13 Votes (Like | Disagree)

Weird, I'm sure Apple made improvements in virtually every single aspect of iOS 7 over iOS 6, and I'm also sure I logged into MacRumors, not twitter.

Must be my computer playing up. Restarting now...


Haha amazing to see how many people now seem to care about form over function when usually they're complaining about Apple doing the same thing. For me quick access to common settings and better multitasking > design of app icons.
Score: 9 Votes (Like | Disagree)

chrmjenkins
Lots of possibilities here. Assuming they're moving to 28nm, it definitely means they're adding stuff if it's getting bigger.

* Rogue family GPU. Die size is unknown for this family so it may well be a reason for increase.
* Quad core. Apple may have optimized iOS 7 and its APIs for a true quad core environment.
* Shadow core. Apple could be implementing a Tegra-like solution with a simplified, slower core that powers up to take care of simple tasks like notifications. Only when the user is fully using the phone do the faster cores turn on.
* big.LITTLE. This is kind of like the shadow core, except it's an actual ARM concept supported directly in their architecture and ISA. Since swift cores are custom, it would be a little different for apple, but it may still be possible for them to use two A7 cores (custom or not) to match their Swift cores for low power operation. It's also possible they've adapted a single A7 core into a shadow core. (*currently ARM's big.LITTLE concept requires the number of A7 cores to match the number of main cores, which is why there is an octa core Samsung Exynos part. Apple may or may not try to break from this restriction)
* Custom circuitry. The redesigned A5 for the appleTV had a lot of custom analog circuitry. It's possible Apple could be going even more custom on the A7 design, which could cause a size increase. They could also be moving off component chips on chip to reduce the overall number of components on the board.


All that being said, I think the premise of the article is wrong. I think the logic board has gotten narrower. Notice how the A6 has room for a triple row of caps to its left? The new logic board only has room for a single row (caps being placed longways, granted). Also, the back of the iPhone 5 logic board has the Hynix memory module spanning the whole board. Now since the board is thinner, it's been forced to rotate 90 degrees to fit since it's longer than it is wide.
Score: 9 Votes (Like | Disagree)

vmachiel
Why do we need quad core? Those swift cores in A6 are a great balance in power and battery life I think.

Why do we need quad core? Those swift cores in A6 are a great balance in power and battery life I think.