The next-generation iPhone will launch on September 6th, according to German Apple website iFun [Google Translate]. The site does not have a significant track record with this sort of prediction, however.

Earlier this week, KGI Securities analyst Ming-Chi Kuo said the low-cost iPhone and the iPad 5 would ship in early September with the iPhone 5S coming later because of production difficulties. Kuo has had an excellent track record in recent years. A ramp in production of the iPhone 5S at the end of this month was reported by a number of parties last week. 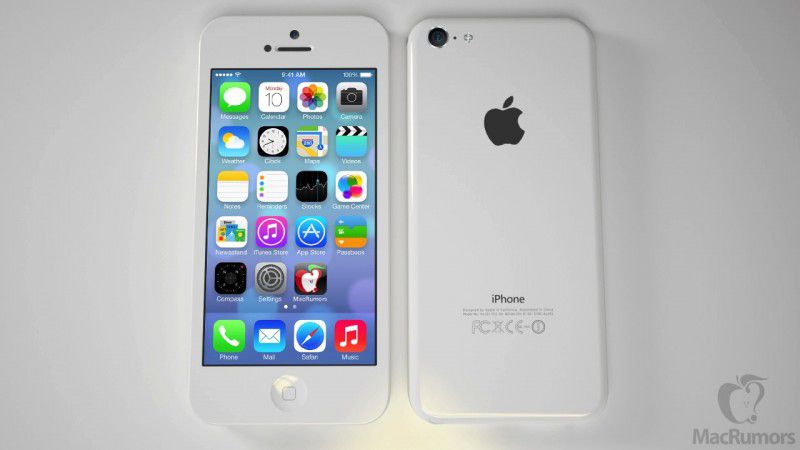 Rendered mockup of lower-cost plastic iPhone front and back

Additionally, iFun claims two new "device types" will be introduced, likely an iPhone 5S and a new low-cost iPhone with a plastic backing that has been extensively rumored.

During Apple's earnings call this week, CFO Peter Oppenheimer said that Apple would have a "very busy fall" and said he would go into more detail "in October". It isn't clear whether he meant because new products would be launching then or because that's when the next earnings call will take place.

Update: The Loop's Jim Dalrymple has put an end to this rumor with a simple, "Nope."

Correct. I don't know who he is, and I have no interest in that. I know he's supposedly a journalist who has confirmed or denied some rumors about Apple products in the past.

I'm afraid you can not justify any of this.
Can you show me a document proving Apple has something to do with his statements?
Otherwise, for all I know, that "nope" could be based off of many analysts predictions.


His immaculate track record speaks for itself. It is enough to know that it isn't based off analyst predictions, because their track records are abysmal. Of course, it's up to you if you don't want to believe it.
Rating: 6 Votes

How is he "legendary"?
His "nope" still leaves hopes, he's not Mr Cook.


I guess you don't know who he is. He's practically Cook's mouthpiece. If Apple wants to deny rumors, they will tell him. He's been 100% right.
Rating: 5 Votes

sulpfiction
So far pretty light on 5S leaks. But I think that's all going to change over the next couple weeks. Getting excited!
Rating: 5 Votes


Because it looks just like the iPhone 5 but with dual-led flash.
Rating: 4 Votes

Rocketman
Sometimes it helps to go with the obvious.

The next earnings call is Oct 24 ish. That's when Tim will give a substantive update to the question asked 7-24 because it will be public then.

Yes an iPhone 5S and an iPhone 5P (plastic) will be released in September-ish. As will a MacBook Pro, a MacPro, an iMac, and an iPad5.

In the mean time we will see a Mac-Mini.

Sometime in early 2014 or sooner we will see a iPad-Mini retina, and may see an iPhone "Midi". Hard to say because it is not rumored or certain, but a version of iPhone 5P enlarged (5PL) would be trivial to release.

We do know that iCar is in the supply chain now waiting for individual vendors to release in the summer-autumn auto season. Before Christmas. Of course you have to buy a whole car to get an effective iPad-Mini, but hey, why pay less?

We also know a body based device is near release. Whether you call it a watch, or a pen or a pocket watch, it will be a utility that interacts with stuff over bluetooth, such as an earpiece and be totally hands free. Yes it will tell time and make all nature of calls, texts and such, but it will also be "the payment system".

We know that the day a 4K display is practical to produce in any mass-volume we will see Apple TV morph from a hobby. Every bar, restaurant and facility will buy a half dozen or more each. Consumers may buy some too. :)

In the mean time Apple TV as it exists now will simply add channels and apps. Unleashed HBO, CNBC and other premium channels please. Or at least one week delayed content from same.

Sometimes it helps to state the obvious to separate the wheat from the chaff in terms of rumors.


Sept 6th is a Friday.. so they would have to have the event the week before? Can't see that happening.


Yeah usually that would mean an announcement on the Tuesday (10 days) before, with preorders starting Friday (7 days before).
At least that's how I remember ordering a couple of my own iPhones.
But I know what you mean, that sounds way too soon. Announcement in August?

Less than a year later?

They would never do that.

If the iPhone 5S is released in early September, it would be in line with this timeline.
However, my personal sentiment is that it feels too early.
(Not sure if I bit on a sarcastic remark :) )
Rating: 3 Votes


Sept 6th is a Friday.. so they would have to have the event the week before? Can't see that happening.
Rating: 3 Votes
[ Read All Comments ]