Following the introduction of T-Mobile's "Jump" and AT&T's "Next" early upgrade programs, T-Mobile has launched a new anti-AT&T ad campaign that calls the company's Next policies "calculating, sneaky, and underhanded," reports AllThingsD.

First introduced last week, Next is AT&T's answer to Jump, a T-Mobile program that allows users to upgrade their phones at regular intervals with a $10 monthly fee. Like Jump, Next provides AT&T users with an option to upgrade their phones more frequently, but its $32.50 monthly charge is on top of standard monthly fees, ultimately causing customers to pay double for their devices.

A comparison of the two plans reveals that a T-Mobile customer using Jump would pay $518 for a 16 GB iPhone 5 over the course of a year while a customer using Next would pay $630, a premium of $112. With both plans, customers have to trade in existing devices and pay the monthly fees in order to obtain an upgrade.

T-Mobile CEO John Legere has been vocal about AT&T Next since its debut, releasing a number of tweets condemning the program. The company's newest ad includes a quote from The Verge that Legere highlighted last week: "AT&T's reaction to T-Mobile's transparency is to be more deceptive than ever." 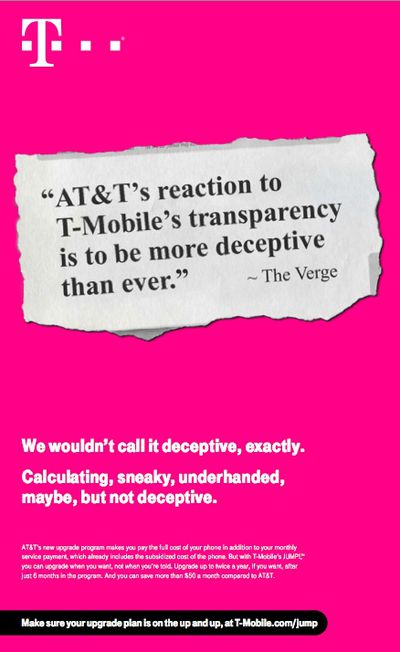 Verizon has also introduced an upgrade program called "Edge," which shares similarities with AT&T's Next program. A 16 GB iPhone 5 costs $565 on the plan. According to T-Mobile marketing chief Mike Sievert, Verizon will be targeted in ads set to run later this week.

"There are real and material differences between what we are doing and the so-called upgrade programs that AT&T and Verizon are doing," he said.

T-Mobile and AT&T have an ongoing feud that originally began in 2011 after AT&T was unable to purchase the T-Mobile network due to objections from the Federal Communications Commission and the Department of Justice.

Tensions ramped up in January after Legere called the AT&T network "crap," leading to an advertising war between the two companies as T-Mobile unveiled its "Un-Carrier" policies, designed to decouple device fees from service fees.

macsrcool1234
AT&T has never turned down the opportunity to screw their customers.

Because attacking your competition in the media looks really good to consumers.

I'd shy away from them just because of their ad stance.

zemaker
When my contract expires w/ AT&T this year, I am moving to T-mobile...

AT&T is truly a greedy corp, not that all companies aren't but AT&T is truly the worst of the worst.
Score: 21 Votes (Like | Disagree)

newdeal
Wait so you have to pay $630 for an iphone 5 AND then you have to trade it in at the end of the year? Seriously? That is absurd
Score: 12 Votes (Like | Disagree)

tigres
I am really really liking T-mobile. Like the bully on the playground is starting to see some troups gathering to kick his ass back finally.
Score: 11 Votes (Like | Disagree)

Lord Hamsa
I'm liking T-Mobile's attitude more and more as time goes by. If I can be convinced their network is in good shape, I may just switch to them next year when my contract with AT&T expires.

A bold new approach to data usage would seal the deal. My proposal: drop bandwidth-based data plans and go with unlimited data with priority-based throttling. Based on your amount of usage, the system could throttle your bandwidth on as as-needed basis during peak times, while giving you essentially unlimited unthrottled use during non-peak times. I mean, why should data transmitted over a virtually empty network at, say 4am be treated the same as heavy usage time during the middle of the day?

With such a scheme, those who make the heaviest use during peak times would see their speeds throttled accordingly to give other folks a chance, but be perfectly free to go with heavy use in light periods. True power users could pay for a premium level of service that increases their base priority or limits the amount of throttling they can be subject to.

It's simpler and fairer for the customer, and there's no reason this can't be built into any kind of modern computing system.
Score: 9 Votes (Like | Disagree)

Because attacking your competition in the media looks really good to consumers.

I'd shy away from them just because of their ad stance.


In most cases I would agree with you. I've been a happy AT&T customer for years (I know, SHOCKING!) but they really do deserve to be called out on their Next program.
Score: 8 Votes (Like | Disagree)
Read All Comments