Apple today released a 30+ page report [PDF] from real estate consultancy Keyser Marston Associates examining the direct and indirect financial impact of Apple on the City of Cupertino and Santa Clara County. The document is part of the building process for the company's new 'Apple Campus 2' -- the Spaceship -- planned for opening in 2016.

As the document is aimed at the municipal governments in the area, it is heavy on tax revenue and job numbers, but there are a few bits of information that are interesting to Apple watchers. 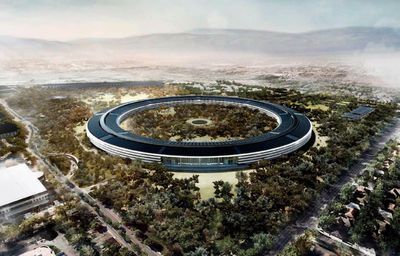 Phase 2 will add 300,000 more square feet of space, adding room for 1,200 more employees -- however this phase has been delayed indefinitely for cost-saving reasons.

- The analysis uses a conservative hiring growth rate of 10% per year, estimating that 7,400 employees will be hired at Apple's Cupertino headquarters between June 2013 and the opening of the new campus in 2016. This would tally a total employee count at 23,400, though over the past 5 years, Apple has seen an annual hiring growth rate of 18%.

- Apple will pay $9.2 million in tax revenue directly to Cupertino in 2013, approximately 18% of the city's annual general fund budget. The consultants estimate that Apple will generate a net fiscal surplus of $8 million to the city this year, with that expected to grow to $11 million when the new campus is finished. This means Apple will pay millions of dollars more to the city than it uses in services.

- The construction of the new campus will generate 9,200 full-time jobs in the county over the three-year construction period, and will generate one-time revenues to the City of Cupertino in the form of construction taxes and fees totaling more than $38 million. The company has agreed to direct its contractors to purchase all construction materials from within the city, ensuring that Cupertino collects millions of dollars in sales taxes as a result.

- The report touts $66 million in public improvements to be built around the campus, including bicycle and pedestrian facilities, park land, and a voluntary $2.5 million contribution to Cupertino's affordable housing fund.

The full report, available from Apple's public relations page [PDF], includes dozens of pages of charts and tables to support the assertions. The new Spaceship Campus is not expected to have any significant opposition and has already received broad approval from the city.

jfx94
Amazing how much the local and state government benefits from the taxes on this, yet provides very few services in return.
Score: 7 Votes (Like | Disagree)

Hate apple. just a money sucking corporation now(maybe always was). For sure, Tim Cook is a dick.


You must really hate Apple to come onto an Apple-specific forum, register, and post not one, but multiple negative comments on an article that outlines how Apple is benefitting the local economy with tons of jobs for Americans and millions in tax revenue for the city of Cupertino.
Score: 5 Votes (Like | Disagree)

petsounds
I don't really understand the design of this building. It just seems like form over function. How does Joe from Hardware Design at the bottom get over to Melissa in the Art department at the top without walking around that gigantic circle? You'd think there would be spokes on that wheel, or a monorail or something. It just seems very inefficient and a bit imposing.
Score: 4 Votes (Like | Disagree)

Amazing how much the local and state government benefits from the taxes on this, yet provides very few services in return.

Have you ever been to Cupertino and experienced that city, or are you just talking out of your rear?
Score: 4 Votes (Like | Disagree)

Wednesday May 25, 2022 8:56 am PDT by Hartley Charlton
Leaker Jon Prosser today shared ostensibly accurate renders of the iPhone 14 Pro, providing the most accurate look yet at what the device could look like when it launches later this year. In the latest video on YouTube channel Front Page Tech, Prosser revealed renders of the iPhone 14 Pro made by Apple concept graphic designer Ian Zelbo, highlighting a range of specific design changes...
Read Full Article • 109 comments