Earlier this month, a report revealed that Apple's upcoming "spaceship" campus in Cupertino is both behind schedule and $2 billion over budget. Apple was said to be looking to cut costs on the project, which is apparent in the revised campus plans that it submitted to the city today.

Apple originally planned on constructing a 600,000 square foot area of buildings (known as the Tantau Development) in two phases. Phase 1 was to take place alongside the construction of the main Apple campus, while Phase 2 would be delayed until later. 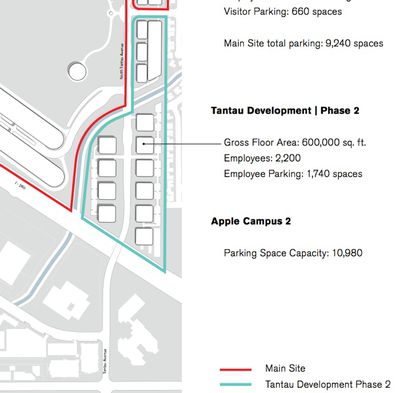 In order to trim 300,000 square feet of construction costs from its budget, Apple has pushed the entire Tantau Development to Phase 2, which means it will be completed after the main campus is built.

Phase 2 includes 600,000 square feet of office, research and development buildings for up to 2,200 employees along North Tantau Avenue, providing flexibility to address future business needs. Construction of Phase 2 will follow completion of Phase 1. The Tantau sites will have small satellite plants.

Apple's revised campus plan includes the addition of an expanded section detailing bicycle access improvements, which comes with an included visualization of what bike pathways and sidewalks might look like on the campus.

Also notable in the plan is a minor increase to parking availability and updates to public improvements, as well as a new section on Public Art that details four locations where the company plans to install art near the campus.

Apple Campus 2's budget rests near $5 billion, which is said to be because Steve Jobs insisted on design quality and expensive construction methods. The Campus, a circular 2,800,000 square foot 4-story building, is designed to hold 12,000 employees and has a prospective completion date of 2016.

BornAgainMac
I wonder if Apple will wait until the Campus is built and they move in before they work on the Mac Pro?
Score: 18 Votes (Like | Disagree)

komodrone
burning question is, "will we have free wifi"? :rolleyes:
(referencing the proposal video)
Score: 7 Votes (Like | Disagree)

My friends who work at Pixar bike from San Fran (take their bikes on the train), a lot of people do. Apple isn't close enough to the city, however I'd like to see Apple give incentives to workers who bike. It'd cut down on traffic, parking lots and long term maintenance costs. The weather is temperate for most of the year.

How about the "incentive" of good health and a greener planet. Isn't that enough of an incentive for bikers/walkers?? Works for me!

Why do some people think the employer needs to pony up in the equation? Walking or biking is the ultimate think global and act local at its finest! I don't need any incentive to act responsible and help the planet for future generations.
Score: 5 Votes (Like | Disagree)

3282868
My friends who work at Pixar bike from San Fran (take their bikes on the train), a lot of people do. Apple isn't close enough to the city, however I'd like to see Apple give incentives to workers who bike. It'd cut down on traffic, parking lots and long term maintenance costs. The weather is temperate for most of the year.
Score: 4 Votes (Like | Disagree)

oh and perhaps I am being petty but it irks me to see the child cycling next to the traffic in that pic. I know its just an artist rendering but adults should always be the ones who cycle next to the cars.


If the adult is the main wage earner of the household, it may make more sense for the child to be the one next to the cars.
Score: 3 Votes (Like | Disagree)
Read All Comments

Saturday February 4, 2023 10:05 am PST by Eric Slivka
Online retailer TigerDirect has slashed pricing on the M1 iPad Air in several colors, offering the base 64GB configuration for just $313.99 in Purple and Pink. Note: MacRumors is an affiliate partner with TigerDirect. When you click a link and make a purchase, we may receive a small payment, which helps us keep the site running. That's a savings of 48% compared to Apple's normal $599.00...
Read Full Article • 374 comments

Sunday February 5, 2023 6:07 am PST by Joe Rossignol
Apple has discussed selling a new top-of-the-line iPhone alongside the Pro and Pro Max models in 2024 at the earliest, according to Bloomberg's Mark Gurman. Based on this timeframe, the device would be part of the iPhone 16 lineup or later. In a September 2022 edition of his weekly "Power On" newsletter, Gurman said there was "potential" for an iPhone 15 Ultra to replace the iPhone 15 Pro...
Read Full Article • 329 comments