Late last year it was revealed that Apple purchased a 98-acre campus from Hewlett Packard, just up I-280 in Cupertino. Last night, Apple CEO Steve Jobs, in trademark black turtleneck and jeans, explained Apple's plans for the space to the Cupertino City Council. Here's what the new 4-story building holding 12,000 employees will look like when it's completed in 2015:

As Steve describes it:

It's a pretty amazing building. It's a little like a spaceship landed. It's got this gorgeous courtyard in the middle... It's a circle. It's curved all the way around. If you build things, this is not the cheapest way to build something. There is not a straight piece of glass in this building. It's all curved. We've used our experience making retail buildings all over the world now, and we know how to make the biggest pieces of glass in the world for architectural use. And, we want to make the glass specifically for this building here. We can make it curve all the way around the building... It's pretty cool.

The facility will be 80% landscaping, with most of the parking underground, compared to 20% landscaping with all above ground parking currently. The current campus has 3,700 trees and Apple plans to increase that to more than 6,000 trees, including "some apricot orchards."

Apple also plans to build its own energy generation facility using natural gas, with the electricity grid as a backup.

One of the city councilors asked what the citizens of Cupertino would get from the new campus, and in particular brought up a free Wi-Fi network, like Google offers in Mountain View. Steve responded that Apple was the largest taxpayer in Cupertino and he felt that the tax benefits to having a company like Apple in Cupertino was benefit enough and the city should be providing a service like that.

"If we can get out of paying taxes, we would be glad to provide free Wi-Fi."

bitsoda
I love how Steve knows he's the smartest person in the room as he assures the city councilman that he has no need for using their third-rate touchscreen drawing technology.

Roy G Biv
Was the council's request for free wifi in jest, or are they retarded?
Score: 28 Votes (Like | Disagree)

kalsta
Once again, Apple is holding out on us. I have it on good authority that the REAL New Apple Campus looks like this 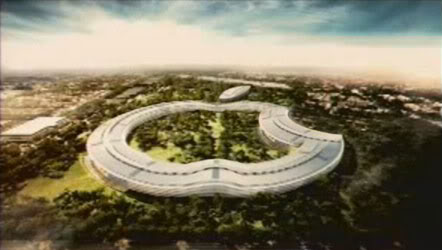 JesterJJZ
That was better than the Keynote the other day.
Score: 14 Votes (Like | Disagree)
Read All Comments

Saturday March 6, 2021 7:33 am PST by Joe Rossignol
Apple on late Friday evening added a "while supplies last" notice to its iMac Pro product page worldwide, and removed all upgrade options for the computer, leaving only the standard configuration available to order for now. We've since confirmed with Apple that when supplies run out, the iMac Pro will no longer be available whatsoever. Apple says the latest 27-inch iMac introduced in August...
Read Full Article • 327 comments

Friday March 5, 2021 9:53 am PST by Joe Rossignol
Initially filed in 2016, a class action lawsuit that accuses Apple of violating the Magnusson-Moss Warranty Act, Song-Beverly Consumer Warranty Act, and other U.S. laws by providing customers with refurbished replacement devices is set to proceed to trial August 16, according to a notice this week from law firm Hagens Berman Sobol Shapiro LLP. Apple's repair terms and conditions state that,...
Read Full Article • 177 comments

Friday March 5, 2021 8:20 am PST by Joe Rossignol
While we are likely at least six months away from Apple unveiling the so-called iPhone 13 lineup, rumors about the devices are starting to accumulate, so we've put together this recap of everything that is expected so far. The upcoming iPhone 13 lineup will consist of the same four models and the same screen sizes as the iPhone 12 lineup, according to reputable analyst Ming-Chi Kuo,...
Read Full Article • 133 comments

Friday March 5, 2021 10:59 am PST by Sami Fathi
Apple Fitness+, the latest service to join the Apple family, integrates tightly with the Apple Watch to offer a comprehensive and growing selection of workout and exercise videos made by a team of professional trainers. Apple Fitness+ Studio (via Men's Health) Apple curates and records all of the videos at a location in Santa Monica, California, and each video features a similar background...
Read Full Article • 108 comments

Friday March 5, 2021 4:06 am PST by Tim Hardwick
Microsoft has officially released version 89 of its popular Chromium-based Edge browser, bringing its long-trialed vertical tabs feature to Mac for the first time. Vertical tabs are intended to make more efficient use of screen space, and should prove a welcome addition for users browsing on 16:9 ratio displays in particular. Users can click vertical tabs to switch between them and...
Read Full Article • 171 comments