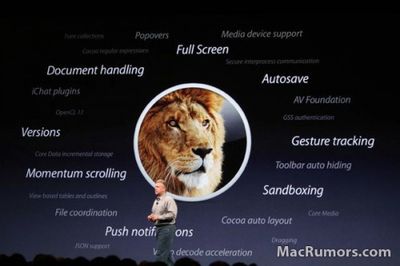 Mac OS X has been around for 10 years now, built on a solid UNIX foundation. Phil Schiller said in the keynote that OS X has "evolved", and is great "not because of hardware, but because of software."

Apple today showed off ten of the 250 new features in Mac OS X Lion, revisiting some of the features that had been highlighted previously and showing off some that are brand new. Some of the new features include Windows Migration Assistant, a new version of FileVault, built-in FaceTime and more. OS X Lion Server isn't a totally separate installation, just additional apps that can be run on top of Lion. Server will be available for $49.99 through the App Store.

Lion will be priced at $29.99 and available only on the Mac App Store as a 4 GB download, allowing users to pay once and install it on all of their machines, just like all Mac App Store apps. Apple did not announce specific release date for Mac OS X Lion, but narrow down the launch window to the month of July. Customers who purchase a Mac between today and the Lion launch in July will get the upgrade free from the App Store.

"New" features, most of which we have seen before -- but Apple feels they are important enough to demo:

1. Multi-touch gestures, very similar to iOS: Taken everything they've learned from iOS and applying that to Lion. Swipe, pinch, etc. Scrollbars disappear when not in use.

2. Full Screen Applications: "Really important for notebooks." Lion has a standard method for full screen apps. A swipe gesture allows you to get back to the desktop, and users can have more than one full screen app running at once, with a swipe gesture to switch between them.

3. Mission Control: The "best feature of Lion" according to Phil Schiller, is a combination of Spaces, Expose and an App Switcher. Spaces are managed through Mission Control, allowing them to be deleted and added on the fly.

4. Enhanced Photo Booth: This is a big feature for the teen crowd. Head into any Apple Store on a Friday or Saturday evening and you'll see many teenagers playing with Photo Booth and uploading pictures to Facebook. The new and improved Photo Booth can follow your face and make "targeted facial enhancements", such as making just your eyes huge.

5. Mac App Store: In the past 6 months, the Mac App Store has become the #1 software channel for Mac applications. Some developers have more than doubled their revenue by offering their software in the Mac App Store. New additions to the App Store in Lion will be in-app purchases, push notifications and application sandboxing for increased security.

6. Launchpad: Imagine the iOS home screen, with rows of app icons, on a Mac. That's Launchpad. It will make finding and organizing apps much, much easier for the average user (think, your Mom). You can even make folders, yet another iOS feature) within Launchpad. It's initiated by a gesture.

7. Resume: Instantly resume where you were in an application when you quit it -- just like iOS. There seems to be a trend popping up here. Works system wide, when you reboot, all of your windows and apps return how they were. Lion auto-saves everything. It makes for easy versioning, and reverting to past changes, much like Time Machine does now, but on a file-by-file basis. Every change is logged -- though it only stores the difference between revisions, making it very space efficient.

8. AirDrop: A new document sharing method. Lion will find other users running AirDrop and display all the machines it can see in the Finder. Sending files is as easy as dragging and dropping an icon on the AirDrop logo. The recipient gets a prompt, confirms they want the file, and it downloads to their computer. It sounds simple, but it should be very handy. BOOM.

9. Mail: Mail has been completely redesigned, with lots of inspiration from the iPad Mail client. Search looks much more intelligent, and there is a new conversation view apparently inspired by Gmail.

chenks
my question is... if after i purchase Lion, what if i want to wipe my mac and install from scratch?

Do you even have a mac?

I honestly do not want to use the App Store or be tied to an account.
Score: 16 Votes (Like | Disagree)

RafaelT
Awesome price... better give us a way to burn a copy though.
Score: 14 Votes (Like | Disagree)

0007776
That's too bad, I wish it was available on a disk, my internet is too slow to buy it. By thie time I finish downloading a 4Gb file 10.8 will probaly be out. I wish Apple would give us options it would be cool if you could buy it from the app store or on some sort of physical media.
Score: 14 Votes (Like | Disagree)

Apple is genius. Now, if you want the next version of the Mac OS, you have to register an Apple ID, which may encourage you to buy more things in the App Store and iTunes music store in the future.


Apple is turning into Big Brother, if it hasnt already.

The lack of a DVD of OS X Lion is despicable. Canadians generally only get 25gb of bandwidth per month from Bell and each gigabyte after costs $2.00. My area does not support speeds faster than 2mbit, so a real life download speed of no better than 250kbps. A 4gb download of this would cripple most people on an already disgusting offering from a monopoly telecom company.

I expected better from Apple, such as, I don't know, TRIM support in OS X since they've been selling macs with SSDs for nearly 4 years now? And no, apple branded SSDs dont count, they're inferior to the offerings from Intel, OCZ, etc.

I really hate what Apple has become.
Score: 13 Votes (Like | Disagree)
Read All Comments