According to a new report from media research firm TDG (via GigaOM) 14% of households with broadband internet owned an Apple TV, Roku box, or similar streaming platform during a study in 2012.

While that sounds like an impressive number, Smart TVs have been slowly taking over the connected TV market. 25% of households owned a smart TV that comes equipped with apps, such as those offered by manufacturers like Samsung and LG. 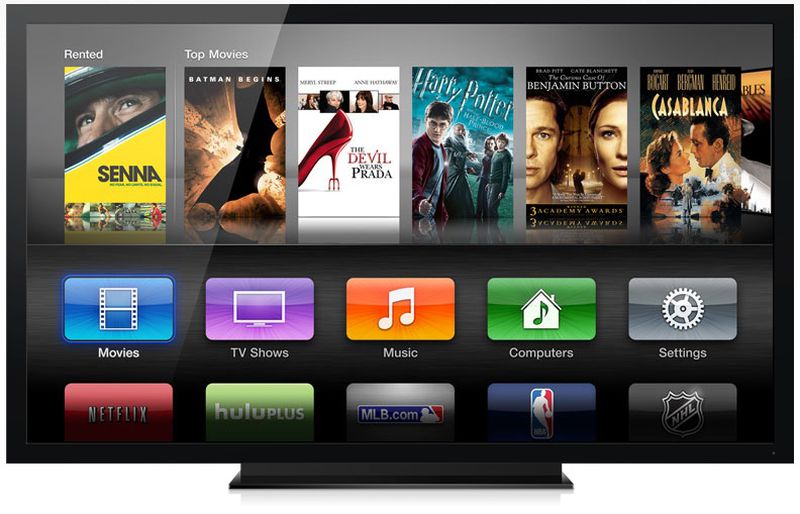 Smart TV adoption grew from 12% in 2011 to 25% in 2012, while connected set top box adoption grew just two percentage points year over year. While not all Smart TV owners use the "smart" capabilities, 69% of users surveyed connected their Smart TVs to the Internet, indicating that roughly two thirds of Smart TV owners take advantage of the TV's functionality.

With Smart TVs positioned as a rapidly growing market, it is unsurprising that rumors of an Apple-branded smart TV have abounded since 2011, when Walter Isaacson's famous biography revealed that Steve Jobs had an interest in revolutionizing the television industry.

The iTV, as it has been dubbed, is rumored to come equipped with app integration and Siri functionality. The latest rumors, which surfaced in March, suggested that Apple is currently working on an "Ultra HD" or "4K" television set with a resolution of 3840 x 2160.

Such a set could launch in late 2013 or early 2014, although a potential launch timeframe has been a moving target for Apple observers over the past several years as the company has apparently yet to make its TV work into a formal project.

Daze & Confuse
Smart TV sales rose because every TV over a few hundred $ is a smart TV - whether you want it or not.

I don't know anybody who chose their last TV because it was 'smart' - or even care whether it is - but they have ended up with smart TVs anyway!
Score: 33 Votes (Like | Disagree)

needfx
I don't find recent TV sets all that smart

If anything, they're idiotically counter-intuitive
Score: 25 Votes (Like | Disagree)

rmwebs
Do the MacRumors editors intentionally keep incorrectly referring to it as 'iTV' to spark up a 10 page argument on why it will never be called that?

Here's the end result of the game: Some idiot with no clue says Apple will buy out ITV. This annoys anyone with half a brain living in the UK as its a stupendously stupid suggestion.


It will never, ever, ever, ever be called the 'iTV'. There's a reason that Apple renamed it to 'Apple TV' before it launched.
Score: 17 Votes (Like | Disagree)

KdParker
How many times are we going to hear about this Apple iTV without a credible production date rumor?
Score: 14 Votes (Like | Disagree)

Apple fanboy
It won't be called iTV if they do. http://www.itv.com
Score: 13 Votes (Like | Disagree)

HiRez
Wake me up when something happens. :rolleyes:
Score: 12 Votes (Like | Disagree)
Read All Comments