"It's likely that part of the thinner/lighter design will be reducing the size of the LED backlight, partly by making the display more efficient and partly by using more efficient LEDs," said Paul Semenza, an analyst at NPD DisplaySearch, in an e-mail to CNET.

The Retina displays of the third and fourth generation iPads required a dual-LED backlight along with a bigger battery, which caused them to be thicker than the previous iPad 2.

Semenza also pointed out that a shift to a film-based touch sensor might also serve to reduce bulk. The current iPad mini incorporates a DITO film touch panel sensor which contributes to its 7.2mm thickness. He was unsure whether Apple might consider a switch to different display technology, but some reports have suggested that Apple is investigating IGZO panels. 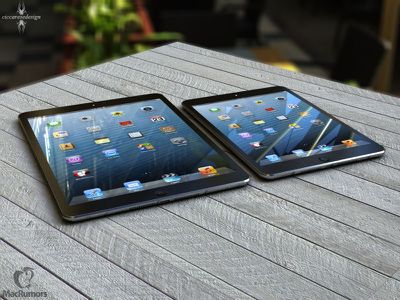 Mockup of the 5th generation iPad next to the iPad mini
DisplaySearch has extensive sources in the display supply chain, but a mixed track record when it comes to predictions. Before the launch of the fourth generation iPad DisplaySearch claimed that the tablet would launch with a thinner design, a prediction that ended up being incorrect after the iPad was released with the same form factor as the third generation iPad. The research firm did, however, accurately predict the in-cell display technology used in the iPhone 5.

Rumors of a thinner iPad 5 originated last year and were followed up with photos of an alleged rear shell of the device in January and case leaks in February. Photos of the front bezel of the iPad 5 surfaced yesterday, featuring a narrower iPad mini-style design.

ArtOfWarfare
This just in:

The next generation of iOS products will be similar to, but better than, the current generation.

You heard it here first, folks!
Score: 23 Votes (Like | Disagree)

Arcady
This crap is already thin enough to cut a bumper in half.

There is no need to make it any thinner.

In fact, can I have a thicker iMac with a blu-ray drive in it please?

No? Ok I will build a hackintosh.
Score: 20 Votes (Like | Disagree)

retroneo
The 9.7" iPad is definitely way too heavy.

When it falls onto your face when reading in bed it hurts.... iPad 5 needs to be much lighter than the iPad 2.
Score: 7 Votes (Like | Disagree)

The next generation of iOS products will be similar to, but better than, the current generation.

You heard it here first, folks!

I find this funny yet my sentiments to macrumors because this is technically still news no matter how much we dumb it down.
Score: 7 Votes (Like | Disagree)

Oracle1729
Instead of making it even thinner, why not add some extra battery volume? My only real complaint about the iPad 4 is the battery dies very fast when playing games.

And while we're talking about the iPad, how about realizing it's now 2013 and they can stop charging 2008 prices for flash memory upgrades? When I can buy a 256 gig high-end SSD for under $200, there is no excuse for charging $200 to add 48 gig of flash to this thing.
Score: 6 Votes (Like | Disagree)

In fact, can I have a thicker iMac with a blu-ray drive in it please?

No? Ok I will build a hackintosh.

Yeah, and can I have an even thicker iMac so I can play my old VHS tapes in it?

No? Ok I will buy a VCR at the thrift store.