Another Japanese parts vendor, iLab Factory, has now posted a new set of photos showing not only those two parts but also a third flex cable that appears to house the device's front camera. iLab Factory points out that these parts may be from the iPhone 5S but could alternatively be from Apple's rumored lower-cost iPhone. 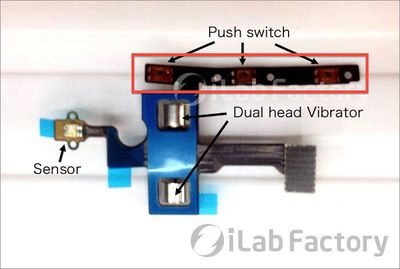 Vibrator/audio control flex cable for iPhone 5S or lower-cost iPhone
One interesting item of note that we neglected to point out in our previous report relates to the vibrator/volume control flex cable. The part contains a strip of three buttons to run along the edge of the device, corresponding to the locations of the two volume buttons and the mute switch on previous iPhone models. But on this part, all three features appear to be buttons, suggesting that this upcoming iPhone may see the mute switch become a push button.

The other two parts shared by iLab Factory reveal little information, with the home button flex cable appearing essentially identical to the previously seen part except for a part number change from 821-1684-01 to 821-1684-02. These parts do, however, contain a significantly longer cable than seen on the corresponding iPhone 5 part.

The layout of the front camera flex cable is nearly identical to the corresponding iPhone 5 part, although this leaked part is missing the microphone and other sensors seen on the iPhone 5 part offered by iFixit.

Why?? Nothing is wrong with the toggle.

I think a toggle is BETTER than a button - not as easily pressed accidently. Plus, I can see the little orange color easier on a toggle to know that it's in silent/vibrate mode.

Of course, you'll get the snarky Samsung commercials about all the Apple fans waiting in line for a 'button instead of a toggle', and the Samsung sheep will eat it up.
Score: 32 Votes (Like | Disagree)

XboxMySocks
Why?? Nothing is wrong with the toggle.
Score: 15 Votes (Like | Disagree)

I'm SICK of leaks. I want it like the old days, where we had no clue what was going to happen with the next gen iDevice. I HATE leaks on Apple products. :mad:

boshii
Maybe it will be too thin for a toggle.
Score: 9 Votes (Like | Disagree)

newdeal
its likely a dedicated camera shutter button and the silent switch will be moved
Score: 8 Votes (Like | Disagree)
Read All Comments

Friday September 30, 2022 12:51 pm PDT by Juli Clover
Apple CEO Tim Cook has been touring Europe this week, sitting down for interviews with various media publications. Augmented reality has been a running theme in Cook's discussions, and it is a topic he brought up again in an interview with Dutch publication Bright, which is part of RTL News. "I think AR is a profound technology that will affect everything," Cook said, echoing comments from...
Read Full Article • 264 comments

Sunday October 2, 2022 6:41 am PDT by Joe Rossignol
Apple is developing new iPad Pro, Mac, and Apple TV models, and at least some of these products will be released in October, according to Bloomberg's Mark Gurman. However, Gurman continues to believe that Apple is unlikely to hold an event this month. In the latest edition of his Power On newsletter, Gurman said "the big iPhone 14 unveiling last month was probably it for Apple in 2022 in...
Read Full Article • 131 comments