The Economic Times reports (via iPhone Hacks) that Apple is tripling the size of its reseller network in India by 2015, growing to 200 stores.

These franchisees, who did not wish to be named, told ET that they have been asked to scale up operations in the country as the Cupertino-based company plans to grow aggressively in the country. In addition to increasing the number of Apple exclusive stores, called Apple Premium Resellers, that are owned and managed by 17 franchisees, the company also plans to expand its presence in multi-brand stores, they said.

Some of these plans are said to have been discussed during last month's Mumbai visit of Hugeues Asseman, Apple's vicepresident (sales) for Europe, Middle-East, India, and Africa. Asseman met key trade partners and franchisee owners to take stock of the company's India business and to outline the company's expansion plans.

We first noticed Apple's expansion plans almost exactly one year ago after the company posted a job listing seeking a new national manager for the Apple Premium Reseller (APR) program in India, with the listing describing a "significant growth plan for the future". 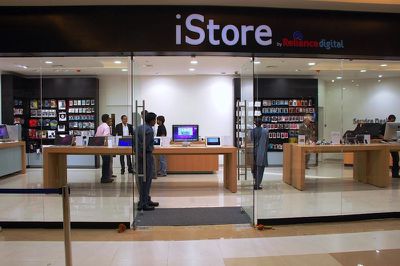 Today's report also indicates that Apple has still been unable to find a way to open its own retail stores in India, given regulations requiring such single-brand stores to source 30% of their products from within the country.

Currently, the US company does not manufacture any of its products in India and the 30% sourcing clause could, therefore, deter it from opening self-owned stores. But it has asked its franchisees to upgrade Apple exclusive stores in India to global specifications, including designing, lay-outs, fit-outs, and is even sending its global suppliers to fit those stores. These outlets will have a lot of glass decor, which Apple uses at its company-owned stores in the US. The cost of refitting and redesigning each store is expected to be more than Rs 1 crore, which the company will reimburse the franchisee owners over a year, an Apple Premium Reseller franchisee said.

Late last year, Apple brought on two new distribution companies to assist with the company's iPhone business in India, an effort that resulted in a tripling of sales.

Apple has also been working to expand its content ecosystem in India, launching music and movies in the iTunes Store back in December and complementing that move with a February debut for the Apple TV.

ritmomundo
I wonder how the poor guy pronounces his name "Hugeues Asseman." Imagine introducing yourself...

The photo of the store looks very lack luster compared to stores in the US.


What did you expect, a retail store in the Taj Mahal?
Score: 4 Votes (Like | Disagree)

Do APRs not qualify as "Single Brand Stores" and so not need to source 30% of their products in India? It seems to me their single brand is Apple and so they'd be subjected to the exact same rules?

I don't consider Walmart to be an APR...

Also, this sourcing rule seems really silly. I don't understand why you would want manufacturing jobs. Those are lousy jobs that you should try to keep out of your country and with whatever countries are most desperate for jobs.


Wow, that's slightly elitist. Manufacturing job lousy? What's wrong with an honest days work for an honest days pay? Tons of people have worked in manufacturing and provided a good living for their families. Not to go all "bring our jobs back" but we could use some of those lousy jobs right here in the good ole US of A.
Score: 2 Votes (Like | Disagree)

Franchising surprises me. Yet I am very surprised Apple didn't enter the Indian market earlier.


India has a lot of red tape - foreign companies get buried in it.
Score: 2 Votes (Like | Disagree)

It's not opening it's own, it's seeking reseller expansion (i.e. Target in the USA).

India is pretty big so this goal is aggressive but feasible.
Score: 2 Votes (Like | Disagree)

AppleGuesser
Good luck with that. 200 stores by 2015 seems a bit over zealous.
Score: 2 Votes (Like | Disagree)
Read All Comments