A new job listing on Apple's site indicates that the company is developing a "significant growth plan" for its network of Apple Premium Resellers (APRs) in India, seeking a new national manager to oversee expansion of the program.

There are currently 49 APRs in India with a significant growth plan for the future.

The new position will be based in Bangalore, where Apple has a minor existing presence.

Earlier this year, rumors surfaced suggesting that Apple was considering opening its own retail stores in India after the government relaxed laws that had required significant domestic ownership of single-brand stores. It is unclear whether Apple's planned expansion of its APR network in India means that it has decided against opening its own stores in the country, but any such Apple retail plan appears to have been a long-term project in any case. 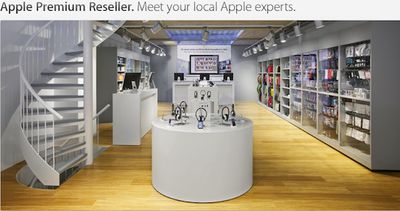 India is one of the four "BRIC" countries whose developing economies are seen as major growth markets, with Brazil, Russia, and China also being included in that group. Apple has clearly focused its initial efforts for this group on China, although Apple CEO Tim Cook acknowledged in an interview last month that the company has also been increasing its efforts in Brazil and Russia. Consequently, India appears to be Apple's lowest priority among emerging markets, but the company is undoubtedly keeping a keen eye on developments there and building its APR network as an interim measure to increase its presence.

Macman45
China and India....Complete common sense, the fastest growing economies are going to get attention from all major manufacturers not just Apple. It's where the market lies, and where growth will come.
Score: 4 Votes (Like | Disagree)

shashwat
Correctly said bushido..all i see are blackberry and samsung..!and blackberry.. And did i mention blackberry yet?I hate blackberry!and most of the people buy it cz its CHEAP...

@varunkrish-i live in kolkata nd there is a bistro here that uses ipads as menus...

Apple is going to take india seriously!m convinved about that..! But the only question is HOW SOON
Score: 2 Votes (Like | Disagree)

SBlue1
smart move. its a one billion people market.
Score: 2 Votes (Like | Disagree)

psejcf
Whether Apple opens its own retail stores or not depends a lot on local policies and the return on investment it can expect. Apple has opened a store in China because it's able to do that and China is a big market. From what I've read, in India, the rules for a company like Apple to open its own retail store mandate 30% local sourcing. Why in the world would Apple leave its well performing supply chain and manufacturers in China to source parts in India??? At what cost would that even be a "good idea" to consider? Unless Foxconn (which already has a presence in India) and Apple's other parts manufacturing partners expand in India, Apple would not be able to meet the government mandate.

And what about import duties that increase the prices by about 30% or so (for Apple products)? Apple would have no control over that for as long as the products are manufactured outside and imported.

Without government support for companies like Apple to expand, it's just not possible even if the market seems big enough. For the above reasons, Apple consumers in India would have to put up with third party resellers whose only concern for the brand value would be the money it brings in (and not really anything to do with support or service).

Restrictions like the above mentioned are why Apple products get sold very widely in gray markets and not through formal retail channels around the world, especially in Asia where Apple's presence is a lot lesser than in US, Canada and Europe.
Score: 1 Votes (Like | Disagree)

hrishidev
This is really good move by Apple. They are looking in BRIC countries.
I already started liking Tim Cook as CEO :apple:
Score: 1 Votes (Like | Disagree)
Read All Comments