Reuters reports that Walmart is expanding its iPhone-based Scan & Go self-checkout system to over 200 of its stores, up from 70 currently. The company began pilot testing on the project, which allows users to scan items into an iPhone app as they shop and then easily pay for their items at a checkout station as they leave the store, last August.

For now, "Scan & Go" only works on Apple Inc devices. An Android version should be out soon, Walmart said.

With more than half of its shoppers using smartphones, Walmart is trying to make shopping more convenient for shoppers who embrace mobile technology. More than half of the customers who have tried the "Scan & Go" feature have used it more than once, [Walmart senior vice president Gibu] Thomas said. 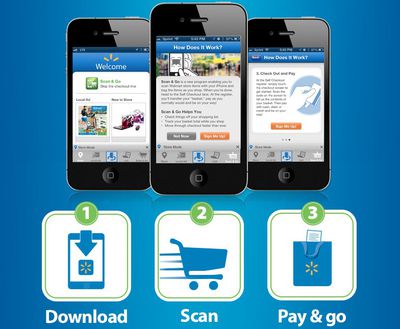 The Scan & Go program is currently in place at a number of Walmart stores in Georgia and Arkansas, with individual stores in Vancouver, Washington and San Jose, California also participating. The current expansion will bring the program to a number of new areas in the central and western part of the United States.

The report notes that while customers are able to record their purchases on their iPhones, they still must pay using traditional methods at self-checkout stations, and the company declined to comment on whether it has plans to offer more integrated mobile payment methods such as directly through the app itself.

Scan & Go is offered through the standard Walmart iOS app, with users able to access a special mode of the app when they visit Walmart locations supporting Scan & Go.

notjustjay
What could possibly go wrong with letting Wal-mart customers scan and bag their own items? :eek:
Score: 10 Votes (Like | Disagree)

japanime
Fantastic. I know lots of folks don't care for Walmart. But the adoption of iPhone technology by a major company is nothing but a good thing.
Score: 8 Votes (Like | Disagree)

Wow, I was interested when I read they were expanding this because I notice a new self checkout station being installed at my local Walmart thinking this is what it's for. Unfortunately Florida is not on the list :/ oh well


Yeah, Florida has a good track record with "technology" (in the broad term of anything invented after 1 AD)... Hanging chads anyone?

derondantzler
It's actually pretty awesome and a time saver.

The way that it actually works is:


* Scan the items you want with your phone.
* When you're ready to checkout, you go to a self-service checkout and transfer the Scan & Go basket to the register by scanning a QR code on the register.
* You pay and go.


Contrary to previous posts, you don't have to weigh anything (like the traditional self-service checkout method requires).

Theoretically you use the re-usable shopping bags, and bag everything as you scan, so the shopping experience is seamless.

Can't wait to see this in more stores.
Score: 3 Votes (Like | Disagree)


Have you even used nfc?
Score: 3 Votes (Like | Disagree)

Wednesday September 21, 2022 7:49 am PDT by Juli Clover
Apple on Friday released the new iPhone 14 models, and MacRumors videographer Dan picked one up on launch day. He's been using the iPhone 14 Pro Max non-stop since it came out, and over on the MacRumors YouTube channel, has shared his initial thoughts on the day-to-day experience with the latest iPhone. Subscribe to the MacRumors YouTube channel for more videos. Dan's mini review highlights...
Read Full Article • 133 comments

Tuesday September 20, 2022 12:17 pm PDT by Juli Clover
Apple today released the second beta of iOS 16.1, introducing some notable changes to charging indicators on the iPhone and also fixing a few bugs. We've rounded up all of the changes in the second beta below. Battery Status Bar Visual Charge Indicator Apple in iOS 16 added battery percentage to the battery icon in the status bar on Face ID iPhones, and in iOS 16.1 beta 2, improved the...
Read Full Article • 95 comments

Monday September 19, 2022 6:55 pm PDT by Joe Rossignol
iOS 16 introduced a new privacy feature that requires apps to receive a user's permission before accessing their iPhone's clipboard to paste text from other apps, but some users have experienced an issue that causes the prompt to appear excessively. According to The Wall Street Journal, Apple said it plans to address this issue in a software update that will be released next week. This news...
Read Full Article • 104 comments

Tuesday September 20, 2022 7:52 am PDT by Sami Fathi
Chinese smartphone maker realme is asking its "loyal fans" for ideas on how to copy Apple's Dynamic Island from the iPhone 14 Pro and iPhone 14 Pro Max. In a challenge, realme says, "the UI around the camera hole could morph into different shapes and sizes to display incoming phone calls, alerts, notifications, and more," precisely like Apple's Dynamic Island. The company finds this idea...
Read Full Article • 83 comments

Tuesday September 20, 2022 8:42 am PDT by Joe Rossignol
Repair website iFixit today shared an in-depth teardown of the iPhone 14 Pro Max, providing a closer look at the device's internals. Notably, the teardown includes a photo of the plastic spacer that replaced the SIM card tray on the U.S. model. All four iPhone 14 models sold in the U.S. no longer have a physical SIM card tray and rely entirely on digital eSIMs. The teardown confirms that...
Read Full Article • 211 comments