The trendy Aloft Hotel in Cupertino, which is located a mere two blocks from Apple's headquarters, has installed an Apple TV in each of its 123 rooms. Using the Apple TVs, hotel patrons can access television shows and movies via iTunes, and use Netflix and Hulu in addition to the Apple TV's other apps.

AirPlay is available for playing videos and music, and according to Square International, (via CNET) the company that installed Aloft's Apple TV system, the hotel can use the set-top boxes to provide guests with important information and access to the front desk.

The system can be customised to include your branding and images associated with the hotel. Additionally, you can integrate information about hotel services, including room service menus, the spa brochure, restaurant menus, shopping catalogues, local maps and city guides.

Our powerful, yet easy to use PC, Phone or Tablet management system allows Front Desk, Housekeeping or Engineering to use any web-enabled PC to enable / disable the system to act as an additional revenue stream, clear down all guest information with one click and even quickly and clearly see if a unit is offline. 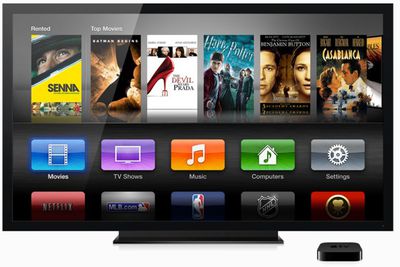 The Apple TVs can be customized with iTunes accounts from any country and are wiped after each use to allow guests to access their private iTunes accounts.

Though the Apple TV is often referred to as Apple's "hobby" project because of its lack of popularity, Apple CEO Tim Cook noted that more than two million of the devices had been sold during Q1 2013, an increase of 60 percent year over year.

Cook also reiterated that the Apple TV was an area of intense interest for Apple, saying "I tend to believe that there is a lot we can contribute in this space and we continue to pull the string and see where it leads us."

The Apple TV recently received a stealth update that added a smaller A5 chip to the device, but Apple is rumored to be working on a more substantial upgrade that could range anywhere from improved content and the inclusion of third party apps to a full blown Apple-branded television set.

No, I'm talking about the horrible look of the Apple TV interface, i.e. compared to the elegant look of the PS3 interface.

I happen to like the UI of the AppleTV as it has continued to evolve over time. The Sony XMedia bar interface, however, has not changed much over the years. It is a set of icon menus with with hierarchical submenus items. I find it frustrating to use at times.

Contrast that with the current AppleTV UI, each program is represented by an Icon and all settings are under the "Settings" icon. There is no hierarchical menus cluttering up the screen. Once inside the Settings section, you navigate into another submenu as another "screen" which can be easily backed out of.

I'd like to see a detailed explanation from you or alternatively, stop stating your "opinion" as if it were fact. Did you notice that nowhere did I directly state that the PS3 was "horrible"? I stated my feelings about different aspects of it with specific examples. You can say that you "don't like it" or "I think it sucks" or "I think it is horrible" all day long but if you say "it is horrible" then you are making a statement as if it were fact without providing any reasoning behind it.
Score: 7 Votes (Like | Disagree)

RetepNamenots
So how much is MR being paid by this hotel?
Score: 6 Votes (Like | Disagree)

Could be, but compared to the elegance of the PS3 interface, the look of this Apple UI is truly horrible... where did the taste go?

Are you talking about the Netflix UI on the PS3? I happen to have Netflix on both my Apple TV 3rd gen and my PS3. I hate the UI for netflix on the PS3.
Score: 4 Votes (Like | Disagree)

Gosh, that user interface is ugly...


You should try it. The interface makes sense for a device with a five-button remote. Best Netflix browser I've found on any device, too.
Score: 4 Votes (Like | Disagree)

My guess would be hotel advertisements. Possibly by turning on the apple tv, ads will load before the main apple tv menu. That's my guess


Sure... makes sense. But how do you go about customizing an tv? No 3rd part apps, no way into it... nothing. Curious to know if they worked with apple on development for it as maybe a test run.


What? Try in June during the WWDC Keynote.
Score: 4 Votes (Like | Disagree)
Read All Comments