TechCrunch's MG Siegler reports that Apple indeed appears to be moving closer to making a major push into television, perhaps leveraging the existing iOS-based Apple TV to pursue gaming as a focus point for the initiative.

But while Siegler has not heard any specific information about how Apple would open up the Apple TV to developers, multiple sources have informed him that something does appear to be brewing for later this year.

I haven’t heard anything specific about the SDK, but the chatter about Apple’s broader television plans has been picking up. And if that chatter is to believed, something is happening this fall — likely late fall. As always with Apple, those plans are subject to change (and, in fact, have changed a few times in the past — see: “Project Sphere”). As you might imagine, content deals remain a bitch, yet remain vital to such a project. But multiple sources suggest everything is finally lining up for this fall.

Siegler goes on to note that he does not know if the effort will include an actual television set at launch, but he argues that it doesn't really matter whether Apple does or not. The key is to bring apps to either the existing Apple TV concept or to new hardware, whether it be a new set-top box or integrated into a television set. 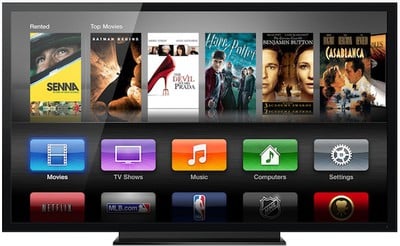 Siegler suggests that under this scenario Apple is likely to hold an event several months ahead of this projected late fall TV hardware launch, using the earlier event to introduce developer tools for the existing Apple TV, although whether that introduction might come mid-year at Apple's Worldwide Developers Conference or at a separate event is unknown.

Earlier this week, analyst Peter Misek claimed that Apple would be holding a television-related product event next month, but the rumor was quickly refuted by The Loop's Jim Dalrymple.

swingerofbirch
Farting apps for my TV?

jav6454
Got my Apple TV and I've got to say, it is really great. I always thought of it as a extra to have, but not essential. I still don't think it's essential, but not an extra anymore. More like a nice companion instead of having to drag my laptop and hook it up to the TV.

gijoeinla
Seriously -- apps coming to Apple TV without a doubt would become a game changer in the CONTENT distribution business. If -- if in fact the content kings are fighting the prospects of a proposed paradigm shift towards "al la carte" programming -- that fight could deflated by a mass market device.. Think about it..

If ANY developer could in fact create an app that delivers "original" or "licensed" product -- what would Apple potentially need network or licensed programming per say. Plus -- plus it would in a way make the App Store a type of "you tube" like marketplace -- where anyone literally could develop an app to deliver content..

Studios are you listening? I happen to work for one of the majors.. Apples iOS user base is just north of 500 mil and growing. Add a real Apple TV that is content loaded -- seriously HOLY ****-AH! Plus what would stop Apple itself or an acquired property from bringing or making its own content deals -- even though Apple claims it wouldn't do -- I call BS on that..

Content is king.. Mark my words -- the value of content will soon start to accelerate -- deals like NFL, NBA, etc etc.. All the players - Apple, Google, Microsoft, etc know all to well that it's the content stupid.. And yea software in my world is considered content.....

Apple TV unlocked could blow the lid off the way content gets distributed -- frankly the dynamics of this delivery will ultimately force Hollywoods hand..

Mackan
Coming soon - Angry Birds on your TV, with touch controls from your iPhone/iPad.

Yeehaw. Not really a threat to any console gaming for a long time.
Score: 5 Votes (Like | Disagree)

Dalrymple repudiate what Misek said. Given each of the party's reputations, that means Misek is refuted.

FirePhantom
I can't wait for this. I want BBC iPlayer, ITV Player, and 4oD apps. AirPlay-ing these from my iPad just doesn't cut it.
Score: 3 Votes (Like | Disagree)
Read All Comments

Tuesday May 11, 2021 5:06 am PDT by Hartley Charlton
Apple's next MacBook Air will feature a completely new design and come in a range of colors like the 24-inch iMac, according to leaker Jon Prosser, who has now released supposedly accurate renders of the new machines based on leaked images. In a new video uploaded to YouTube channel Front Page Tech, Prosser elaborated on his previous prediction that Apple's next-generation MacBook Air models ...
Read Full Article • 83 comments

Tuesday May 11, 2021 11:56 am PDT by Joe Rossignol
Last month, Apple introduced a new iPad Pro with the same M1 chip found in the latest Macs, and early benchmark results indicate that the M1 iPad Pro is over 50% faster than the previous-generation iPad Pro. Based on five legitimate Geekbench 5 results (here's the fifth) for the fifth-generation 12.9-inch iPad Pro with the M1 chip, the device has average single-core and multi-core scores of...
Read Full Article • 266 comments