The Wall Street Journal reports that China Mobile -- the largest cellular carrier in the world -- is planning to spend $7 billion on its LTE network this year, paving the way for the company to support the iPhone 5. Until now, China Mobile hasn't sold the iPhone, though more than 15 million iPhones are used on its networks, but at extremely slow data speeds.

However, China Mobile says there has been "no progress" to report in negotiations with Apple. 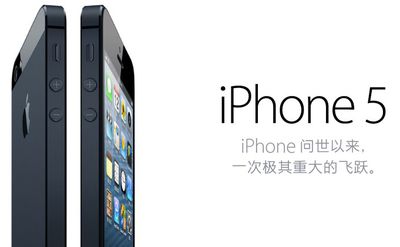 While China Mobile has been in talks with Apple for years over a potential deal to offer the iPhone, Chief Executive Li Yue said that there had been "no progress" to report. In January, Mr. Xi met Apple Chief Executive Tim Cook in Beijing and discussed cooperation, raising expectations that China Mobile would soon begin offering the iPhone.

China Mobile would be a key partner for Apple, which faces fierce competition from Samsung Electronics and other rivals offering smartphones powered by Google Inc.'s Android operating system.

China has accounted for much of Apple's recent record growth, and Tim Cook has traveled to China several times to meet with China Mobile representatives to make a deal.

I would expect China Mobile, which is not technically a capitalist firm, to focus heavily on TD-LTE to differentiate it from the rest of the world and be the first large carrier to focus on VoIP and SMS to replace voice and text over data signals. The fall-back access over 3G and voice is a transition for 2-3 years after which all handsets will be data only and prepaid only.


Why would the largest network in the world, which is owned by the government, has a captive audience, and has 1B subscribers...need to differentiate.

Why would the largest network in the world, which is owned by the government, has a captive audience, and has 1B subscribers...need to differentiate.

It's not a captive audience. Customers move between the carriers just as they do here. It doesn't have a billion subs either. More like 675 million. And it's a semi private company.

Don't be too sure about that. They are losing customers to the other big carriers because of 3G issues.

I don't know about that, Jobs failed to close the deal for years.

Steve has quite a list of accomplishments. Cook OTOH, IMO, is squandering Apple's innovation trajectory. The missteps under his leadership have been enumerated in many threads and a chorus of opinions to replace him is growing.

What you don't seem to know is that the big sticking point with China Mobile is they they have been demanding a percentage of the money from the App Store. I'm not sure if they are demanding from iTunes as well.

This is a problem that Apple can't let slide. If China Mobile succeeded with this, every carrier around the world will demand the same thing. It's more important for Apple to not give in on this than it is to get a deal with China Mobile.

If in your genius, you can think of how to "close the deal" without giving that up, by all means, tell us.
Score: 3 Votes (Like | Disagree)


Well, Steve Jobs also failed to "close the deal" (http://news.yahoo.com/steve-jobs-china-mobile-negotiate-iphone-deal-184547629.html), yet you say it like another thing Cook can't do that Jobs would have. But Jobs couldn't either.
Score: 2 Votes (Like | Disagree)


I really really hope you got my satire
Score: 2 Votes (Like | Disagree)
Read All Comments