During today's quarterly results call for the first fiscal quarter of 2013, Peter Oppenheimer mentioned that the company focused on establishing a new operating segment of Greater China, including Mainland China, Hong Kong, and Taiwan

"We have established a new operating segment for China, given the contribution of that region to our business," said Oppenheimer.

The company has adjusted how it reports revenue for separate geographic regions because of the significant sales of both hardware and software in China during the last couple of years. China was responsible for $6.8 billion of Apple's revenue during the last quarter. Overall revenue in China is up 67%. 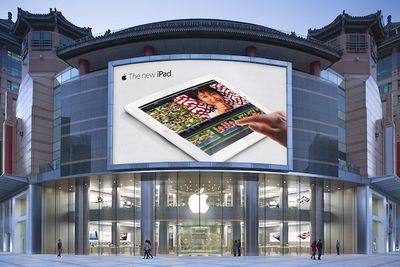 While Apple experienced strong iPhone growth overall, selling 47 million iPhones compared to 37 million in the year-ago quarter, it saw the most significant growth in China, which is up more than 100% year over year. Despite a late launch of the iPad, it was also noted to be successful in the country.

In terms of the geographic distribution, we saw our highest growth in China. It was into the triple digits, which was higher than the market there. We're extremely pleased.

It is clear that China is our second largest region. And there is a lot of potential there.

Apple opened four new stores in the Greater China area during 2012, and when asked about China during the question and answer section, Cook reiterated plans to continue to expand on the 11 stores that it has in the country, saying that Apple had "many more" stores to open.

Tim Cook spent a portion of January in China, meeting with both government officials and representatives from China Mobile, the country's largest mobile carrier. During the visit, Cook was interviewed by Sina Technology, where he emphasized Apple's efforts to raise its profile in the country.

macs4nw
Like it or not, sooner or later, profits from the Chinese market will overtake APPLE's domestic market, so it's definitely smart of APPLE to have positioned themselves so well in that regard.

Wonder how those talks with CHINA MOBILE are going; a deal there, could really explode the sale of cell-enabled iOs devices!
Score: 5 Votes (Like | Disagree)

With a growing middle class, China is a scarily huge market...

So much for the new US plant and more "jOBS" in the US. I have the horrible feeling new jobs in the US will quickly become low paying assembly line jobs. Soon Foxconn will own small US cities and become the #1 employer. China owns us now, might as well start waving those red flags and learning Mandarin and Min.
Score: 4 Votes (Like | Disagree)

1Alec1
Probably because Apple just started selling their products in China. It's easier to improve when you're near 0. But there is also the increase in Chinese wealth.
Score: 4 Votes (Like | Disagree)

themcfly
is that iPad banner real? it has less backlight bleeding than my new iMac 27
Score: 4 Votes (Like | Disagree)

mrsir2009
With a growing middle class, China is a scarily huge market...
Score: 3 Votes (Like | Disagree)

xkmxkmxlmx
That is one cool looking store.
Score: 3 Votes (Like | Disagree)
Read All Comments