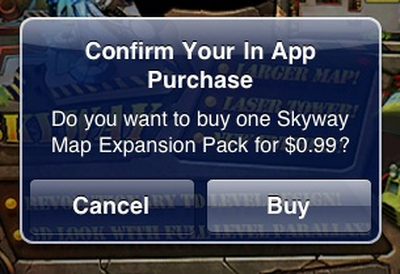 Apple has settled a lawsuit brought in 2011 after children ran up hundreds of dollars in spending on in-app purchases in freemium games.

The company will give iTunes credits to parents who claim their minor bought in-app items without permission and the option of cash refunds for claims over $30.

The proposed settlement comes after parents sued Apple in 2011 upon discovering that their minor children had racked up credit card charges in supposedly free games. The issue was the subject of a Daily Show feature about a father whose kids racked up hundreds of dollars to keep virtual fish alive in a game called “Tap Fish.”

In order to collect under the settlement, Apple users will have to attest that a minor bought “game currency” and that the user did not provide the minor with the Apple password.

The FTC looked into parental concerns over in-app purchases, but apparently let the lawsuit run its course before acting. The agency has examined other issues with kids using mobile apps, particularly around privacy. Late last year, the agency expanded the Children's Online Privacy Protection Act to cover mobile games and social media.

Apple will send email notices to the 23 million iTunes account holders who are affected by the settlement. The full settlement document is available on Scribd.

komodrone
"but I gave my child full access to my phone, and my child did something I didn't want my child to do. WAHHHHHHH IT'S YOUR FAULT APPLE"
Score: 44 Votes (Like | Disagree)

Squilly
How is this Apple's fault?
Score: 32 Votes (Like | Disagree)

More like parenting fail. I rarely am on Apple's side on some issues, but this is one where parenting needs to happen. Things as common as telling your kids, don't buy stuff even if its the game are common sense.

Parenting now a days is easier than ever and yet, parents keep finding the blame anywhere but themselves.

it's not as straightforward as that.

Many games were designed to take advantage of this fact by making the in-app-purchase deceptively easy to purchase, and it not being very clear that real money was being charged (since no password was required).

Why can't there be an option to disable in-app purchases?


Did you read the article? There is that option now, but there wasn't at first.

I think this is partially Apple's responsibility, since they weren't requesting a password when the in-app purchasing feature was first added, making it too easy for kids to make unauthorized purchases.
Score: 24 Votes (Like | Disagree)

Born Again
Parents out there

Go throw them outside and let them play for Christ sake!

Why back in my days we'd play till it got dark not on our devices.
Score: 23 Votes (Like | Disagree)

How much of this is just bad parenting?