Earlier this week, we noted that this weekend's group of Apple retail store grand openings would be headlined by the company's Causeway Bay flagship location in Hong Kong. The store features three levels, with a 30-foot tall glass curtain wall making a significant impact on the shopping center.

With the store set to open to the public tomorrow, Apple has been putting the finishing touches on it and has unveiled the store for passersby to see. ifoAppleStore's Gary Allen pointed to an image posted to Flickr showing showing the full scale of the store's glass facade. 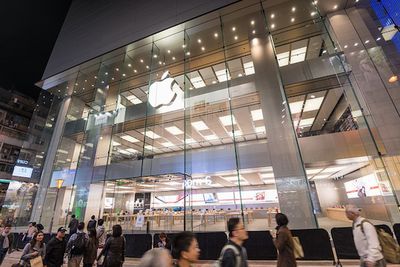 M.I.C. gadget has also posted a number of photos of the store, as well as a short video giving a glimpse of the store from the outside.


As we previously noted, Apple is also opening new stores tomorrow in the following cities: Chengdu, China; Melbourne, Australia; and Malmö, Sweden. Apple is also opening its replacement Third Street Promenade store in Santa Monica, California tomorrow, moving into a much larger space. The new store is one of the first to use a design based on that of the Upper West Side store in Manhattan, with similar stores having already opened in Houston and Palo Alto.

Finally, Apple is opening a replacement Rockway store in New Jersey tomorrow, allowing Apple to close one of its last "mini-stores" in the U.S.

MadDawg2020
wow an all glass facade that lets everyone see all the shoppers inside checking out the itoys.
It doesn't look anything at all like any of the other Apple stores.

Seriously you could take a photo of any of the other stores and say its in Antarctica or the Florida swamp and no one would know the difference.All the Apple stores look the same, thats the whole point. I don't understand the fascination with posting photos of every new store as if it is something special.

Are there websites that post photos of all the new Starbucks or McDonalds that open up as well?
Score: 9 Votes (Like | Disagree)

Rogifan
I'd rather read this than stupid **** Eric Schmidt says or what device some Samsung Exec uses outside of the office.
Score: 6 Votes (Like | Disagree)

mrgraff
That has to be the strangest choice in background music ever.
Score: 5 Votes (Like | Disagree)

I'm surprised Starbucks hasn't tried to make a deal to put their kiosks inside some of the larger, more popular Apple stores, even if some of them already have Starbucks stores next door.

It looks like every other Apple store in every shopping mall in every city everywhere.

Tuesday July 5, 2022 6:57 am PDT by Joe Rossignol
The upcoming launch of Apple's redesigned MacBook Air with the M2 chip has some Windows laptop manufacturers "worried" that sales of Intel-based laptops will be negatively affected, according to industry sources cited by DigiTimes. "A Wintel brand vendor pointed out that at a price point of US$1,000-$1,500, the MacBook Air will crowd out other high-end notebooks," the report claims, with...
Read Full Article • 340 comments

Tuesday July 5, 2022 5:53 am PDT by Hartley Charlton
European Union lawmakers have approved landmark legislation to heavily regulate Apple, Google, Meta, and other big tech firms. The Digital Markets Act (DMA) and Digital Services Act (DSA) were proposed by the European Commission in December 2020. Now, collected in a "Digital Services Package," the legislation has been formally adopted by the European Parliament and seeks to address...
Read Full Article • 516 comments