Apple's retail store unit has been generating some news over the past few days, so we've put together a roundup of some of the more significant items to summarize the latest developments.

- Apple opened its new Palo Alto store on Saturday. The new store replaces the company's previous downtown Palo Alto store that had typically been considered the company's "home store" and was occasionally visited by executives for major product launches. That store, opened in October 2001, was one of the first in Apple's retail chain. 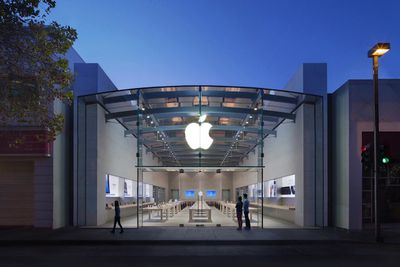 Apple's new Palo Alto retail store
Apple CEO Tim Cook was on hand for the opening of the new store, which is roughly 50% larger than the original one and is one of the first of a new prototype design based on the Upper West Side store in Manhattan. Houston's Highland Village store opened earlier this year with a similar design, while the company is also using the concept for a replacement store in Santa Monica, California.

Sandbags and taped windows at 14th Street store in Manhattan (Thanks, Ethan!)
ifoAppleStore notes that at least 35 Apple retail stores are located within the landfall prediction zone, and with many areas shutting down in advance of the storm it seems that Apple will be temporarily closing at least some locations from this group.

- Finally, in line with Apple retail chief John Browett's announcement at the opening of the latest Beijing retail store earlier this month, Apple will be opening its new Holiday Plaza store in Shenzhen, China on Saturday.

Construction barrier at Holiday Plaza store in Shenzhen (Source: M.I.C. gadget)
The location is notable as Shenzhen is the hub for much of Apple supply chain for its products, with Foxconn having massive facilities in the city dedicated to assembly of iOS devices. The city is also a hub for the counterfeiting industry and is the main point of entry for scalped products coming across the border from Hong Kong.
Tag: Apple Store
[ 69 comments ]

pinchez
Not too concerned about Apple stores and products! But good look to everyone who's affected :)
Score: 8 Votes (Like | Disagree)

EssentialParado
The sandbags I get, but what help does a bit of tape on the windows provide?
Score: 7 Votes (Like | Disagree)

Jetson
The photo of the Palo Alto store is beautiful.

I remember when there were no Apple stores, and Apple products were relegated to the backshelves in electronics stores.

Nowadays Apple stores are so busy you can hardly move around in one while shopping.

He who laughs last, laughs best.
Score: 6 Votes (Like | Disagree)

kps
Now that would be appropriate architecture for Apple stores: made out of aluminum and glass, and then wrapped in rubber and and plastic film to keep them from getting scratched and broken.
Score: 5 Votes (Like | Disagree)

iPusch
I hope the flagship store won't get damaged, I love to visit dat one.
And take care anyone else who gets influenced by sandy, like me :-/ at least school off, hehe
Score: 4 Votes (Like | Disagree)

skeltor57
Omg I hope apple is okay, I love apple products so much they better not get hurt!!!!
Score: 4 Votes (Like | Disagree)
Read All Comments