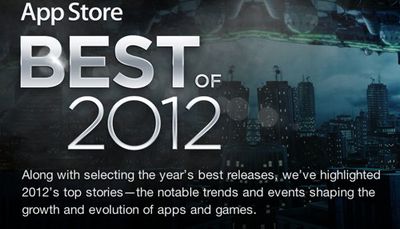 Here are some of the notable winners for 2012:

For the first time in two years, no photography apps made it in to the top listings. 2012 also marks the first year that an Entertainment app was given an editor’s choice award. As always, during the end of the year wrap up Apple highlights games and apps from a wide variety of categories, so it’s well worth skimming the list for hidden gems.

Beyond the top-level awards for music, movies, TV shows, apps, books, and podcasts, Apple is featuring a number of other awards and Editors' Choice picks across various genres and categories for the various content types.

meli
What about Google Maps?
Score: 14 Votes (Like | Disagree)

nrose101
Action Movie FX? Really? It is a nice waste of time for a couple of days...then you delete it!
Score: 8 Votes (Like | Disagree)

lol App of the year for something that came out last night? Give me a break.

What about Google Maps?

lol App of the year for something that came out last night? Give me a break.
Score: 7 Votes (Like | Disagree)

longofest
As good as ActionMovieFX is, I think Google Maps may quickly be more deserving, though Apple would never admit it.
Score: 6 Votes (Like | Disagree)

TouchMint.com
Rayman Jungle Run.... Dont get me wrong its a good game but it is an insult to the iOS gaming industry.

There are innovative great new games out there and they pick this
Score: 6 Votes (Like | Disagree)
Read All Comments