M.I.C. Gadget reports on photos and a video that have surfaced on Chinese site Vgooo.com [Google translation] claiming to show an iPhone 5 that boots to a screen warning that the device is not associated with a registered developer account. Several apparent features of the device do, however, call its authenticity into question, and so we are primarily posting this for interest and discussion at this point. 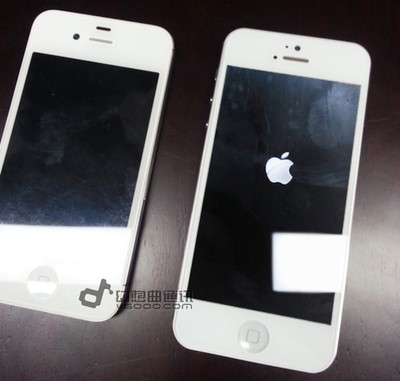 The video shows the device attempting to boot but being directed to a version of the error screen that appears when activation can not be completed. Rather than linking to the iPhone developer portal, however, the text contains a placeholder string of "@@url@@".


One questionable aspect of the device is the presence of a fourth hole or window at the top front of the device that has generally not been visible from the front in previous part leaks. In the iPhone 5, the camera has been moved to above the earpiece, swapping places with the proximity sensor that moves to the left of the earpiece. This leaked device contains a small fourth hole to the left of the camera, and while previous photos showing the backside of the front panel do indeed show the window, it is has not been visible from the front in any previous leaked photos.

This leaked device also contains a rather odd-looking home button in comparison to the home button seen on the iPhone 4S placed next to it in the photos and video. Apple has tweaked the design of the home button for the iPhone 5, but the button shown in the video appears to be a somewhat poor match for the device itself.

Otherwise, identifying information on the device has been either covered up or digitally obscured, rendering any specific model number or other information impossible to read.

Goldfrapp
Obviously fake. Just look at that logo on the back. Looks nothing like the Apple logo. 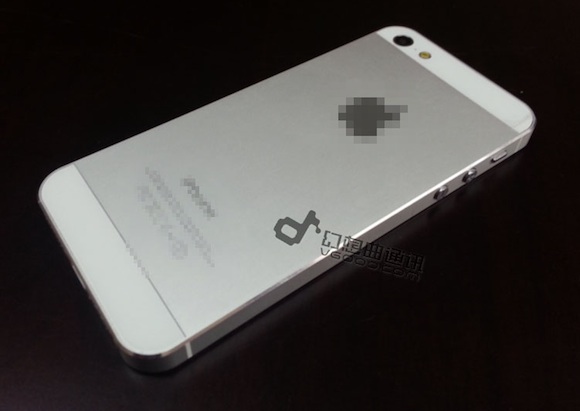 ouimetnick
Doubling down on secrecy... So either Apple is doing a terrible job, or they are trollin.
Score: 16 Votes (Like | Disagree)

miknos
Asians are good at copying.
Score: 10 Votes (Like | Disagree)

Patriot24
* Pin in the dock
* White bands rather than chrome we've previously seen
* The screen appears to be a little off kilter (a.k.a. digitally imposed)
* There is tape on the back where the logos are because they didn't put the logos on
* Extra sensors we've never seen
* Sleep/Wake button looks oddly shaped compared to the 4s
* Odd home button


I'm sure there are other things. This is fake.
Score: 9 Votes (Like | Disagree)

saud0488
With each and every leak, I become more and more underwhelmed. Is this a bad joke? What's there to be excited about exactly?