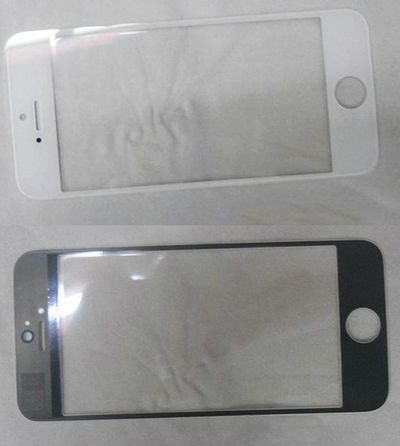 Front (top) and back (bottom) of claimed front panel from white next-generation iPhone
As with previously-leaked photo and video of the black version, the new photo seems to show the front-facing FaceTime camera centered on the device, located above the earpiece rather than to the left of it as seen on current iPhone models. The small black window to the left of the earpiece on the white panel is likely to be the proximity sensor, which is visible above the earpiece on current white models.

The panel also shows a display with an aspect ratio of close to 16:9, in line with rumors of a taller screen measuring four inches diagonally. Overall, the front panel appears to match up closely to a previously-leaked design drawing showing details of the front panel.

Notably, the Photobucket account hosting the new photo is the same one that previously posted leaked measurement comparisons between the rear shells of the third-generation iPad and the iPad 2, showing roughly how much thicker the new iPad would be over the previous model.

bbplayer5
Blows me away why people still buy these things. It literally looks like the very first iPhone from the front. Sure the backing sides etc have changed but lets be honestly.. Apple has completely run out of ideas.

- A slightly larger screen that is years behind the competition.
- Basically the same UI it has had for 5 years. Sure some additions to it, but it looks the same and you still cant customize it without jailbreaking.
- Last company to the market with LTE - argument here is battery life. I get great battery out of my Nexus with LTE on. Copout.


Its just the same phone, a little bigger.
Score: 44 Votes (Like | Disagree)

bad03xtreme
This design is a flop IMO, the screen needed to be wider to keep up with the current market and it seems Apple has failed to do that. I think that decision it will come back to bite them.
Score: 23 Votes (Like | Disagree)

applesith
Tim says Apple is doubling down on secrecy for new devices. This is all fake leaks to throw us off, or Tim was too confident.
Score: 22 Votes (Like | Disagree)

You just beat me to it.
First thing I noticed, this must be fake then.


Before everyone starts bickering about the XL home button slot, take a closer look and notice that the black "front panel" is actually the back of a white/black panel.

The home button slot isn't bigger, you can actually see a faint rim around the slot on the backside of the plate, probably used to hold the home button in place.

Again, the bottom plate is the back of a white/black plate.
Score: 15 Votes (Like | Disagree)

bad03xtreme
What Jonathan Ive's design thought was behind the new iPhone...

Blows me away why people still buy these things. It literally looks like the very first iPhone from the front. Sure the backing sides etc have changed but lets be honestly.. Apple has completely run out of ideas.

- A slightly larger screen that is years behind the competition.
- Basically the same UI it has had for 5 years. Sure some additions to it, but it looks the same and you still cant customize it without jailbreaking.
- Last company to the market with LTE - argument here is battery life. I get great battery out of my Nexus with LTE on. Copout.


Its just the same phone, a little bigger.


- The iPhone screen is better than any Android I have used save the HTC One X. If superior to you means larger, then you'll be excited to hear the new Note is 0.2" larger.

- You can make similar arguments about any UI. Mac OS X is 11 years old and with a broad stroke its "the same". I wouldn't go back tho. ;-P If customization is your thing, well, you already mentioned jail breaking.

- I find it hard to believe you get great battery life out of any android LTE or GSM. I barely get 4 hours of screen time out of my Galaxy SIII on GSM and HTC One X. That's absolutely pathetic compared to the over 12 hours (3 days of use) I got out of the iPhone 4. The best life I got from an Android was from my Droid Incredible 4G LTE, mostly because the screen was a reasonable size and it used IPS technology instead of SAMOLED. Even the RAZR MAXX can't really best the iPhone on anything but talk time. So, I sort of support your argument that the Snapdragon S4 can handle LTE without annihilating the battery, but I can't agree I've ever seen a droid with good battery life in the first place. The nexus is especially pathetic. (Yes, I've used one)

In any case, I find it highly hypocritical of a group that screams choice till the blood vessels burst in their foreheads trying to make an argument against a choice. The iPhone is now and has always been a great choice.
Score: 11 Votes (Like | Disagree)
Read All Comments