As with previous builds, the new one is arriving as an over-the-air update first, and it is generating some confusion since it is labeled as "beta 3" despite being offered to users who already have the third beta installed on their devices. 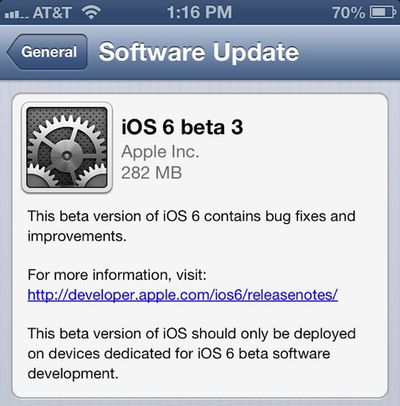 We'll update this post with additional information on the new release as it surfaces.

Xcode 4.5 Developer Preview 4 and Apple TV Software Beta 4 have also been made available to developers today.

Update 2: While the removal of the dedicated YouTube app is the biggest change in iOS 6 Beta 4 seen so far, there have been several other additions and changes, with some of them being tracked in this thread.

- New "Wi-Fi Plus Cellular" toggle in Settings allows apps to automatically fall back to cellular data when the Wi-Fi network the device is connected to is not performing well.

- Passbook app now has a new "App Store" button on the welcome screen. While the button does not currently function, it will presumably take users to a dedicated section of the App Store for apps that integrate with Passbook.

- The dedicated Privacy section in Settings has a new listing for Bluetooth Sharing to help monitor and control which devices can share data via Bluetooth.

- Bug with Passbook brightness has been fixed. Launching the Passbook app automatically forces device to full brightness for optimal scanning of barcodes, but in the previous beta the brightness did not return to normal upon closing the app.

(Thanks to Elijah Walsh for tips on changes!)


Yawn...are you people ever going to give it up? It's like you're personally offended by non-devs who use betas. I suspect it's because it makes you feel less cool and exclusive.
Score: 29 Votes (Like | Disagree)

This is proof that the sixth-generation iPhone will be called the iPhone 5.


^ It's comments like this that annoy me. This comment was clearly a joke but this is the sentiment of many users here on the forums.

I am a paid iOS developer and recent university graduate. I made an iOS application for my dissertation. I sure as hell didn't/don't have enough money to afford multiple iPhones.

I own an iPad and an iPhone and am deserving of my license.


A bit harsh, not all developers keep seperate devices, many of us 'hobbyists' have to use our main phone and take the chances :)
Score: 13 Votes (Like | Disagree)


Get off your high horse. Who gives a crap (besides yourself) if he uses it on his personal for and not for development reasons. And I swear, people like you, your heads would blow up if you couldn't point out repetitive things to everybody all the time (like the memo for TPS reports in Office Space). Just like everyone else, we are all aware that we take the risk of running into issues and losing data. It doesn't need to be pointed out EVERY TIME someone makes a comment about running into a issue using it every day. You would be here a lifetime doing that. Besides, he may be field testing for all you know. Stop assuming. And lastly, this message does need to be pointed out to you and everyone else like you, because you won't stop otherwise.
Score: 12 Votes (Like | Disagree)
Read All Comments