Just hours after our latest summary of reports on the potential for an "iPad mini" coming later this year, Bloomberg weighs in with its own claims that Apple will be looking to introduce the device in October for availability before the end of the year.

The new model will have a screen that’s 7 inches to 8 inches diagonally, less than the current 9.7-inch version, said the people, who asked not to be identified because Apple hasn’t made its plans public. The product, which Apple may announce by October, won’t have the high-definition screen featured on the iPad that was released in March, one of the people said.

Specifically, the report claims that the iPad will "have the same number of pixels as those in the iPad before it was upgraded to the so-called Retina Display earlier this year", giving the device a resolution of 1024x768 pixels. Using the same resolution as on the larger iPad will minimize fragmentation for developers who already need to target their apps for both iPad and iPhone/iPod touch sizes, but the higher pixel density will mean that iPad content will appear smaller than on the full-size iPad. 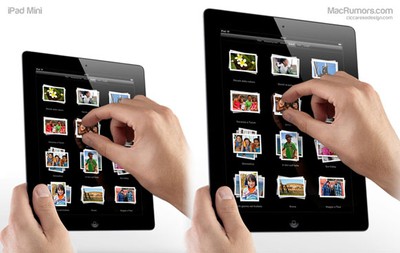 Mockup of 7.85-inch iPad next to an iPad 2 (courtesy of CiccareseDesign)
The report also indicates that Apple has been mulling the idea of a smaller iPad since the launch of the original model, even as Steve Jobs was panning 7-inch tablets being brought to the market by Apple's competitors. But with Amazon's Kindle Fire and Google's forthcoming Nexus 7 at least generating interest at a much lower $199 price point, Apple may now feel that the time is right to release a smaller, less expensive iPad that can help cement its dominant position in the tablet market.

While talk of an iPad mini has been circulating for quite some time with increasing rumors pointing to a launch later this year, Bloomberg is now the second mainstream publication to lend its weight to the claims. The Wall Street Journal reported back in February that Apple was testing such a device and qualifying suppliers, but acknowledged that Apple routinely tests products that are never released to the public.

Update: The Wall Street Journal has added its own claim that Apple's component suppliers are ramping toward mass production of a smaller iPad beginning in September.

There will be millions though, like myself, that do want this size and form factor.
Score: 36 Votes (Like | Disagree)

timshundo
Can we please stop using that "mockup" every time this story comes around? It doesn't do anything to help people perceive a size difference.
Score: 22 Votes (Like | Disagree)

Who wants to be with a fat girl? :confused:

being with a fat girl is like riding a moped. it's fun as heck till some one sees you ridin' it!!
Score: 16 Votes (Like | Disagree)

gmanist1000
What will happen to the iPod Touch? And the price point?
Score: 16 Votes (Like | Disagree)

So it is basically a big iPod touch?