This is What a 7.85-Inch iPad Looks and Feels Like

There's been increasing chatter in the rumor mill about the possibility of a smaller 7.85" iPad that could be introduced sometime in 2012. 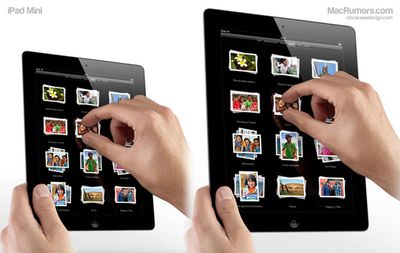 7.85" iPad on left, 9.7" (current) iPad on right
The rationale behind the smaller form factor is for Apple to better compete against the new 7" Kindle Fire tablet from Amazon. Amazon's new Kindle line seems to be an early success with over 3 million sold over the first three weeks. Amazon doesn't break down the numbers for individual models but calls out the Fire as "the most successful product we've ever launched".

Apple's never been one to try to compete spec for spec against their competitors. The iPhone, for example, has kept the same basic form factor across 5 different generations, despite a proliferation of different sizes amongst its competitors. While we're not sure what makes a smaller iPad different, we've heard it frequently enough that we believe Apple is in late prototyping phases for such a device.

The supply chain has actually been very specific about the screen size of this rumored iPad. According to Chinese manufacturers, Apple is buying up 7.85" screens for this upcoming mini iPad. So, we asked our friends at CiccareseDesign to put together these mockups of what a 7.85" iPad would look like in comparison to the existing 9.7" iPad.

They also created this "actual size" PDF that can be printed out so you can play with one yourself in real life.

Download Printable PDF: Home Screen (6MB), Keyboard (18MB)
View on an iPad: Actual Size
Simply print the PDF at 100% size on your printer, and you too can see what a 7.85" iPad feels like in hand. If you don't have a printer handy, you can view it in actual size in an iPad web browser. If you save it as a web icon on your home screen, it will then launch without a menu bar so you can fully appreciate the size.

We should point out that Steve Jobs had been adamant that a 10-inch screen is the minimum necessary for a tablet, and in a conference call said that he didn't believe a 7-inch tablet was a good user experience:

We're not not making a 7-inch tablet because we don't want to hit a lower price point. We just believe it's too small to hit the user experience people want. When we make decisions, it's not about cost, it's about value when you factor in the software. We're all about the best products at aggressive prices.

So, based on that stance, it might seem unlikely that Apple would produce such a device, but they've been known to change their mind before.

applesith
MR, I'm glad you learned how to hold shift in photoshop to scale something proportionally.
Score: 29 Votes (Like | Disagree)

No doubt Google will copy the hell out of whatever will do anyway, so might as well mock up an Andriod look alike.

I personally wouldn't buy a 7" iPad, I'm more than happy with the iPad 2


First - google makes software not hardware.
Second - there are already 7" tablets that run Android. So I think you have that COMPLETELY backwards buddy.
Score: 16 Votes (Like | Disagree)

samcraig
Jobs also said that no one reads books any more and then proceeded to open up the iBookstore.
Score: 10 Votes (Like | Disagree)

I'm still waiting for you to show me a decent Andriod tablet that was out before the iPad....

I wont hold my breath

What are you talking about. I was never suggesting there was or is. You initially posted

"Originally Posted by The Great Boony View Post
No doubt Google will copy the hell out of whatever will do anyway, so might as well mock up an Andriod look alike."

I pointed out you were wrong. That Google doesn't make hardware and that there are already 7" But you keep trying to change the subject instead of just admitting that you made a mistake. It's cool though. It's there in black and white for everyone to see anyway.

h4ck
"The rationale behind the smaller form factor is for Apple to better compete against the new 7" Kindle Fire tablet from Amazon."

and here we see why there is zero credibility to this story.

apple doesn't make things to go into an existing market just to compete. you should know that by now.